OGXers in all but name

In today’s New York Times Week in Review section, Mary Jo Murphy uses the 40th anniversary of Woodstock as a peg/excuse to air a few half-thoughts about a generational cohort born, she claims, between 1955 and 1964. She’s writing, in other words, about those Americans that I’ve named the Original Generation X. And yet… the Week in Review doesn’t dare break with William Strauss and Neil Howe’s generational periodization scheme. Why? 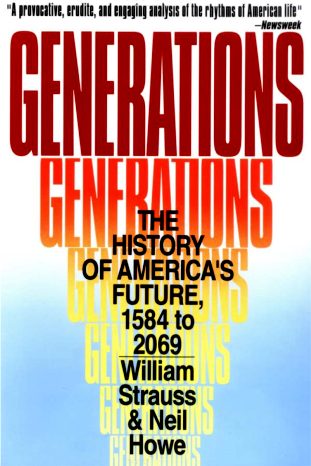 What could possibly explain the awe with which Howe and Strauss’s half-baked scheme, first advanced in their bestselling 1991 pop sociology book, Generations, continues to be regarded by middlebrow journalists? What does Middlebrow, one wonders, stand to gain when Time, Newsweek, or the New York Times suggests for the nth time that a Lost Generation was born between 1883 and 1900, a GI or Greatest Generation from 1901-24, a Silent Generation from 1925-42, a Boom Generation from 1943-60, a Thirteenth or X Generation from 1961-81, and a Millennial Generation from 1982-2003? For what reason do middlebrow periodicals continue to mount an unconvincing defense of Strauss & Howe’s scheme?

The Week in Review section has monkeyed with Strauss & Howe’s hegemonical scheme, now and again, but it’s never rejected it. Back in March, for example, Kate Zernike wrote a Week in Review story titled “Generation OMG,” which quoted Glen H. Elder Jr.’s (hardly revolutionary) notion that there are marked “differences even between two cohorts of children born relatively close together,” i.e., that generations are a question of birthdates, yes, but more importantly one of formative experiences. During the latest presidential campaign, the Week in Review tied itself in knots trying to explain how John McCain could possibly be considered a member of the so-called Silent Generation, and why Barack Obama refused to accept that he was a Boomer. [NB: The graphic shown at the page to which I’ve just linked is credited to LifeCourse Associates — i.e., to Strauss and Howe.]

Thanks to Obama’s anti-Boomerism, in February 2008 the Times grew courageous enough to admit that there are competing generational periodization schemes out there. A Week in Review article by Jenny Lyn Bader boldly proposed that “the practice of defining generations is more complicated than the theory” — i.e., than the influential periodization of Strauss & Howe. But that’s as far as Bader went — perhaps it’s as far as she was permitted to go. Did some middlebrow operative censor Bader before she went too far?

It’s not that journalists assigned stories about the so-called Boomers, say, or the so-called Generation X, or the Millennials don’t glimpse the truth, once in a while. Often enough, a forensic reading of a Strauss- and-Howe-influenced piece of a middlebrow article about this or that generational trend reveals that the author has spotted the same flaws in Strauss and Howe’s badly cobbled-together scheme that I did back in 1992 (in the very first issue of Hermenaut), when I announced my own, half-joking generational periodization scheme. Murphy’s piece is no exception.

The so-called Thirteenth or X Generation, meanwhile, is composed of younger OGXers, my own Reconstructionist Generation (1964-73), and older members of the Revivalist Generation (1974-83). The so-called Millennial Generation, whom I call the Social Darwikians, was actually born from 1984-93; this cohort has been yielded — again, by Strauss & Howe — younger Revivalists, along with an entire generational cohort (1994-2003) still too young to be named.

I describe my scheme as “half-joking,” because of course it’s absurd — in the middlebrow sense of the term, I mean — for any generational periodization to be so regimented, so precise. All those 3’s and 4’s! And yet, middlebrow intellectual standards be damned, I suspect that my absurdist scheme is 100% correct.

Murphy is writing, she claims in today’s Week in Review story, about

the nearly 45 million Americans ages 45 to 54 who form a tag-along cohort to their big brothers and sisters. They are the babiest of the boomers, carrying all of the baggage but none of the bragging rights of their generation. No draft numbers or Hendrix for them. Marches and moon walks were past their bedtime…. And yet they are lumped together with the 78 million or so citizens born between 1946 and 1964 [i.e., the demographic baby boom, which even Strauss and Howe realize doesn’t in itself constitute an actual generation] who as a giant oxygen-sucking mass are supposedly going to bankrupt Social Security and otherwise leave the world (taking their sweet time) a place of vastly diminished resources, expectations and dreams.

“Not this, not that… and yet.” This is the magical formula wielded by Middlebrow to defend its entrenched truisms and received wisdom and common sense from all challengers. Americans born from 1955-64 (cf. my OGXers, born 1954-63; or even Jonathan Pontell’s lame “Generation Jones,” born 1954-65) have little to nothing in common with Boomers born from 1946-54 (cf. my Blank Generation, born 1944-53), writes Murphy. And yet these “boomer laggards,” or “young boomers,” in Murphy’s phrasing, are Boomers nonetheless. Why?

Here, I suspect, is the answer to a lot of things that puzzle me about generational trend pieces published in middlebrow periodicals like Time, Newsweek, and the Times‘ Week in Review section. If we could just figure out how and why the Boomers have been manipulated by Middlebrow from a young age, we might catch a glimpse of the Black Iron Prison itself. Perhaps middlebrow periodicals work so hard to obscure the true birthdates of the Blank Generation (1944-53) because the so-called Late Boomers (OGXers, in my scheme) somehow escaped Middlebrow’s malign influence.

By asking us to believe that OGxers and Boomers are a single generation, that is, middlebrow journalists are (purposely?) making it impossible for us to figure out what’s so wrong with the Boomers, and whether there’s an antidote to Middlebrow’s influence over the rest of us.

What’s the Matter with the Boomers? Thomas Frank demanded, more or less, in his underrated first book, The Conquest of Cool (1997). We need to keep asking that same question!