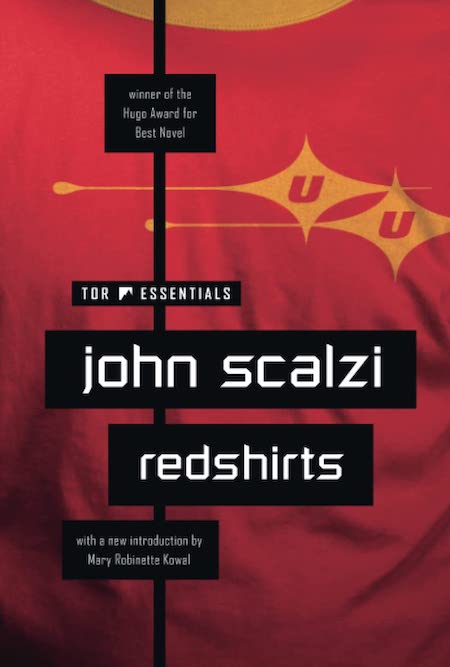 John Scalzi’s Redshirts (2012). A fun, but also emotionally affecting metafictional romp, which begins with Ensign Andrew Dahl’s assignment to the starship Intrepid, flagship of the Universal Union since 2456. Dahl soon discovers that every Away Mission involves some kind of lethal confrontation with alien forces; the ship’s captain, its chief science officer, and Lieutenant Kerensky always survive these confrontations; while at least one low-ranked crew member is always killed — by Borgovian land worms, Longranian ice sharks, etc., etc. Those of us who grew watching the original Star Trek will understand this trope fairly quickly. When Dahl encounters Jenkins, a crew member who theorizes that their reality and timeline are under periodic influence of a badly written TV show from the past, he persuades his fellow redshirts to set out on a rogue mission to assert control over their lives. Once they meet their actor doubles, they realize that they are exact doppelgängers; even their imagined backstories have become integral events of the ensigns’ lives. Three codas, told from first-, second-, and third-person perspectives, are lovely additions.

Fun facts: Winner of the Hugo and Locus Awards for Best Novel. “All these people in all these stories who are just cannon fodder for a 10-second or 20-second dramatic moment — they have lives of their own, they have thoughts of their own,” Scalzi has explained in an interview.