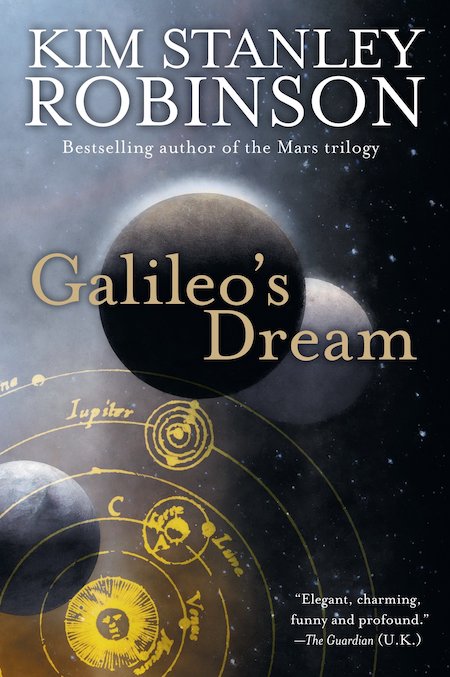 This is a biography of the pioneering scientist and astronomer Galileo Galilei, from the start of his work on telescopes up to his death — with particular emphasis on his 1610 discovery of the Jovian moons, advocacy for the Copernican model of the solar system, and trial for heresy. All of which makes for a fascinating read… but there’s more. Braided into KSR’s closely researched, warts-and-all life of Galileo is a story about the far-future human inhabitants of the Jovian moons — for whom Galileo is a revered figure. When an intelligent entity is discovered deep in Europa’s ocean, Ganymede, a Jovian renegade, travels through time and space to bring Galileo back with him… in an attempt to alter history and ensure the ascendancy of science over religion. Even if it means that Galileo must be burned at the stake — a fate we know he avoided. When these two narratives start to affect each other, Galileo’s story becomes mind-bogglingly complex. For one thing, Galileo is surprisingly nuanced in his thinking about the relationship between religion and science; one doesn’t negate the other, necessarily. For another, KSR here develops a notion of the universe as a “manifold of manifolds,” a continuum (involving three different temporal dimensions) in which past and future coexist, influencing each other in a great multi-dimensional tapestry!

Fun fact: KSR has explained: “The novel came to me as a science fiction idea; what if Galileo looked at the moons of Jupiter through a telescope that took him right to people there in the future? Thinking I guess of David Lindsay’s great beginning to [the Radium Age proto-sf novel] A Voyage To Arcturus, which I have always admired.”