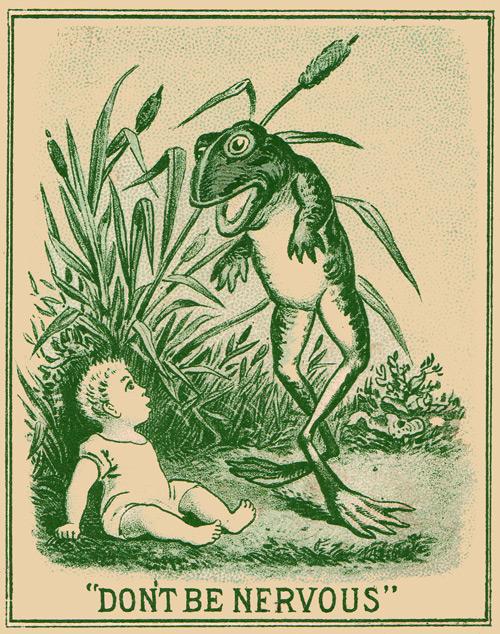 The frog is uncanny in form, it is an avatar of too-much-ness, neither-this-nor-that-ness. This is particularly true in the case of anthropomorphic frogs. (And frog-like humans; one thinks of Edgar Allan Poe’s 1849 horror story “Hop-Frog.”) But as Baudrillard helped us understand in Simulacres et Simulation (1981), the humanoid simulacrum can either be charming or uncanny. This series will mostly introduce you to charming frogs; for frightening humanoid frogs and frog-like humans, check out the examples below.

MR. GREEN FROG: Mr Green Frog seems to be something of a dick. He’s also a kind of proto-Creature from the Black Lagoon — huge, humanoid, menacing.

Most likely not a horror story. But terrifying. 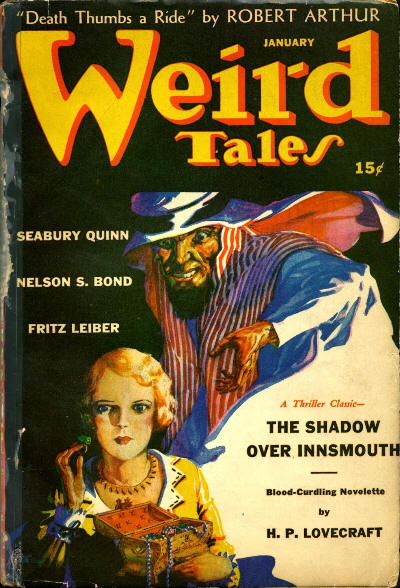 H.P. Lovecraft’s The Shadow Over Innsmouth was published in 1931. It introduces us to the Deep Ones — humanoid beings with fish, human and amphibian-like traits, who are described as having grey-ish green, glossy and slippery skin with white stomachs. They have scaled, ridged backs, as well as webbed and clawed hands and gilled necks. They move about in an inhuman fashion, by hopping oddly, and occasionally move on all fours. They have abhorrent, croaking voices.

Note that Lovecraft was a fan of A. Merritt’s 1919 proto-sf novel The Moon Pool — see HILOBROW’s serialization. There are humanoid frogs involved.

Spoiler: The frog-like creature shown here, which certainly influenced H.P. Lovecraft, turns out to be a friend, not a foe. 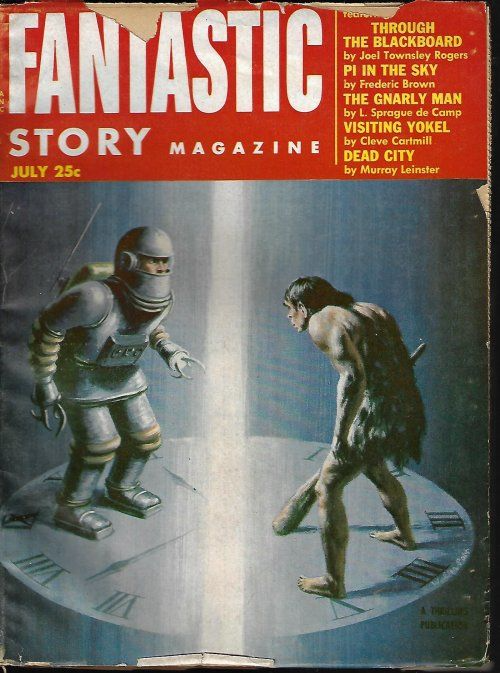 “The Indefatigable Frog,” a sf story by Philip K. Dick, first published in the July 1953 edition of Fantastic Story Magazine, has fun with a paradox of Zeno meant to show the danger of imprecise thinking (and in particular the imprecision of language) in which it is demonstrated that a frog hopping at constant speed in the direction of a pond will never reach the pond. The professors find a way to reduce the size of a frog in half for each leap… and then one of the professors shrinks his rival, too. 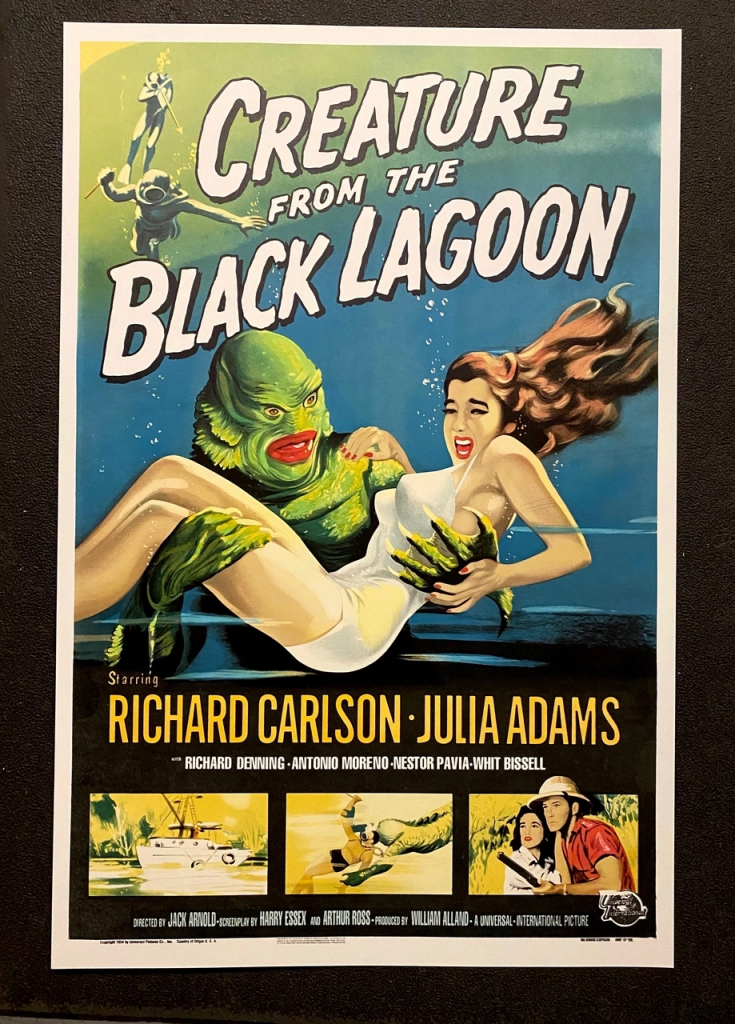 Creature from the Black Lagoon came out in 1954. Read Gerald Peary’s take on the movie here. 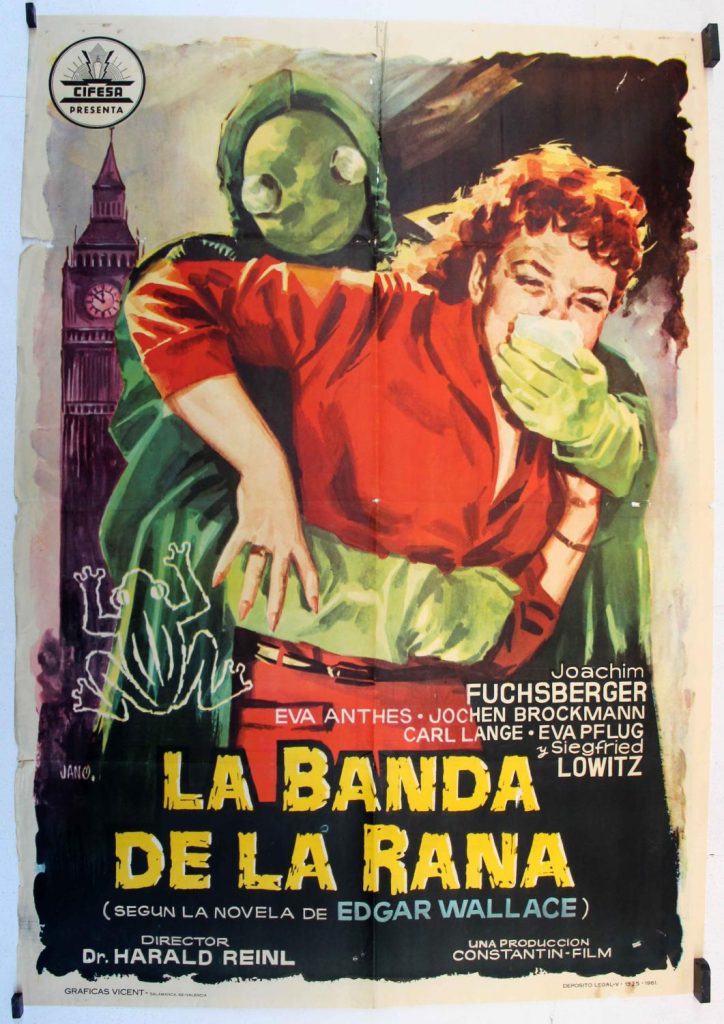 A 1959 movie based on Edgar Wallace’s 1923 crime novel The Fellowship of the Frog.

The above is surely an homage to/ripoff of War with the Newts (Válka s Mloky in the original Czech), a 1936 sci-fi novel by Karel Čapek.

Daredevil was forced to deal with a toymaker who designed a pair of spring-based boots and embarked on a life of crime. 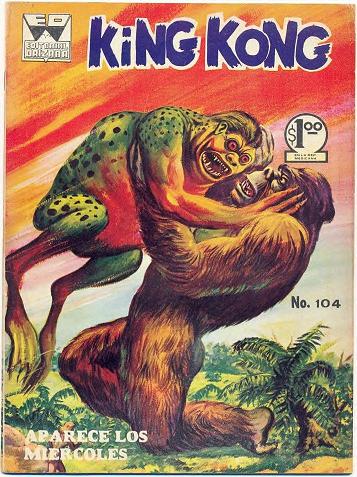 There was a weekly King Kong comic book produced in Mexico by Editorial Orizaba in the llate 1960s. The interior art was sepiatone, but the comics are known for their wild and weird cover paintings…

Toad (Mortimer Toynbee) was created by Stan Lee and Jack Kirby. He was a weak, hunchbacked mutant, with a superhuman leaping ability. Magneto’s sniveling “toady” in the 1960s line-up of the Brotherhood of Evil Mutants. Clearly an homage to Poe’s 1849 story “Hop-Frog.” 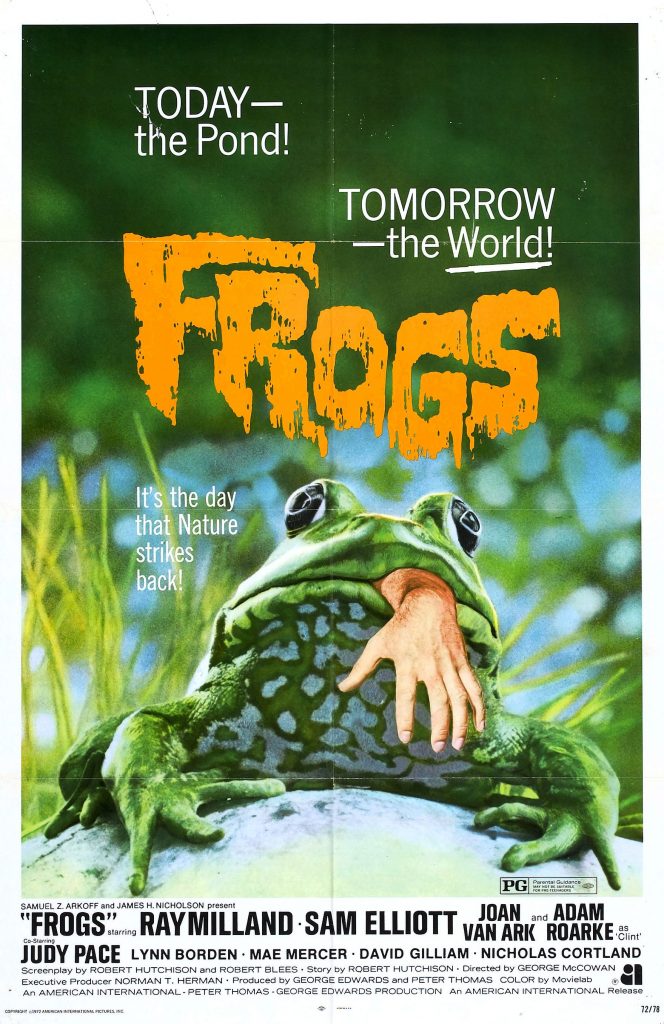 Another allusion to Poe’s Hop-Frog.

Spider-Man fights both the spring-heeled Frog-Man and Toad. Seems inevitable that these two would join forces.

In 1991, one of the characters I created for the comic Zenman, which once in a while appeared in my zine Luvboat Earth, was the villainous Frog in the Swamp of Life. Who really looks a lot like Bill Griffith’s Mr. Toad character. 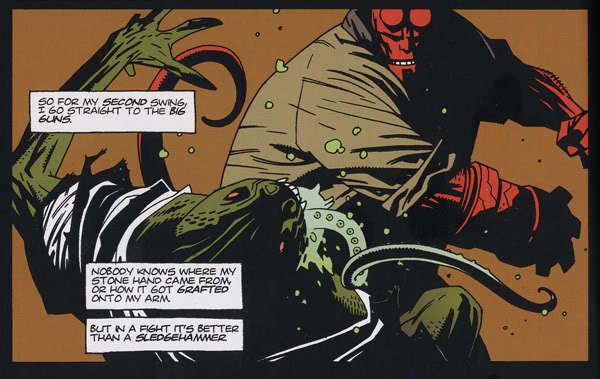