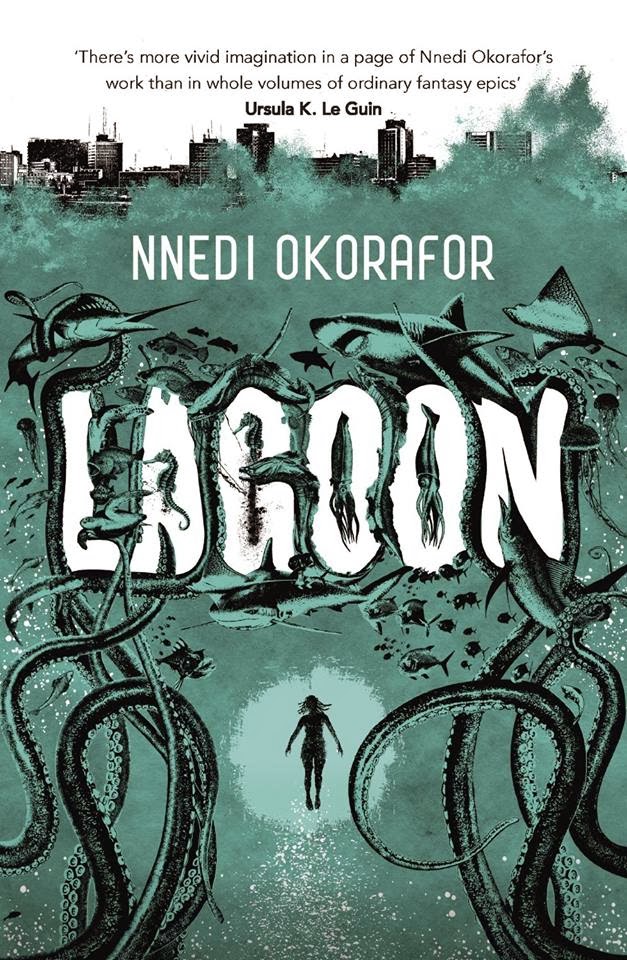 Adaora, a Nigerian marine biologist and mother, Anthony, a famous Ghanian hip-hop artist, and Agu, a troubled Nigerian soldier, each happens to be on Bar Beach — along the shoreline of Lagos — when an alien spacecraft lands in the lagoon. Things rapidly get weird; the lagoon’s polluted water is purified, for example, while the local marine life becomes faster, strong, and smarter. Adaora, Anthony, and Agu become acquainted with Ayodele, a mutable alien ambassador who has assumed human-like form — and who requires them to act as her intermediaries. Aliens, Okorafor would have us understand, don’t necessarily have to land in New York or Los Angeles; and what’s more, aliens aren’t necessarily a worse problem than the ones we currently face. There’s an explosion of violence across Lagos, as competing factions struggle to control or (in most cases) merely profit from this bizarre turn of events; and the story veers into science-fantasy territory as West African gods, witches, folk characters, and genii loci make the scene. Adaora, Anthony, and Agu develop folktalish superpowers — I’m reminded of Nancy Farmer’s 1994 children’s sf adventure The Ear, the Eye and the Arm — as they race to do what’s right for their city… and the world. Our sense of exactly what’s going on depends on who is telling the story, but there are so many story tellers here — from children to corrupt politicians, and from spiders to swordfish!

Fun facts: Okorafor is a Nigerian-American writer of fantasy and science fiction (Africanjujuism and Africanfuturism, in her terminology) for children and adults. She began writing Lagoon in response to Neill Blomkamp’s 2009 film District 9, which portrays Nigerians in a biased way.