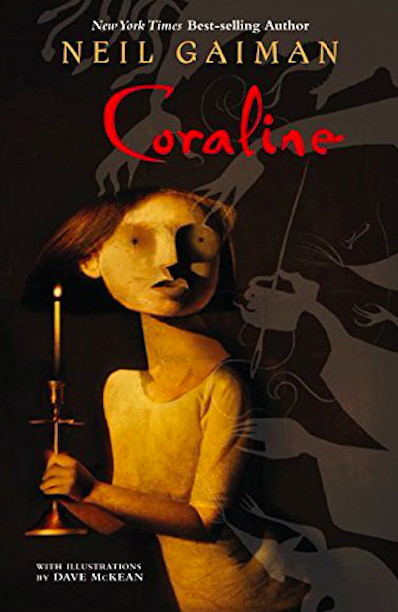 “Don’t go through the door,” Mr. Bobo, one of her oddball new neighbors, warns Coraline Jones — after she and her parents move into an old house that has been divided into apartments. He is referring to a small door that links Coraline’s apartment to the unoccupied one next door. Nevertheless, Coraline goes through it… and discovers a kind of through-the-looking-glass version of her own life, in which an “Other Mother” and “Other Father,” who have black buttons for eyes, pay more attention to her than her own parents. Also: The food tastes better, the toys are more fun, the neighbors are more entertaining, and the local stray cat can talk! Things quickly turn sinister, though, and Coraline must challenge the Other Mother in order to rescue her real parents, herself, and the ghosts of other children her age, from the beautiful lady without pity. The penultimate contest is reminiscent of the hen Billina’s versus the Nome King in L. Frank Baum’s Ozma of Oz. The final contest is even more terrifying.

Fun facts: Winner of the Hugo and Nebula Awards for Best Novella. The 2009 movie adaptation, directed by Henry Selick and voiced by Dakota Fanning, Teri Hatcher, Jennifer Saunders, and Dawn French, is one of the most successful stop-motion films ever.