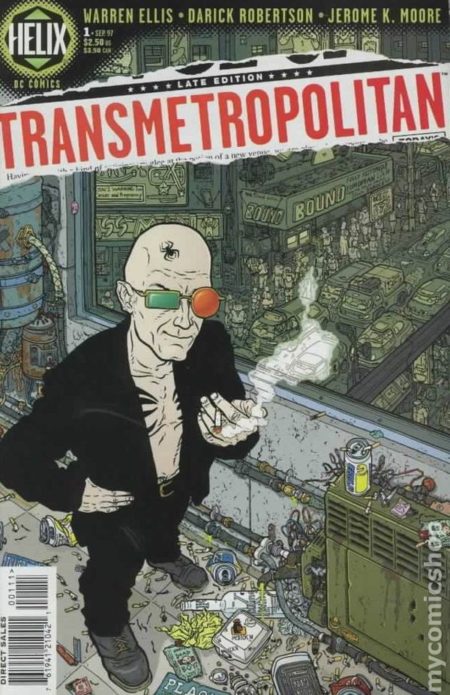 At some point in the 23rd century, Spider Jerusalem — a Hunter S. Thompson-esque gonzo journalist — returns from his mountaintop refuge to The City, in search of stories to report. Accompanied by sidekicks Yelena Rossini and Channon Yarrow, Spider gets the scoop. For example: The Transients, who’ve modified their genes with alien DNA, and who as a result have been forced to live in a squalid shanty town, are getting ready to secede; their leader, however, turns out to be a police-paid agent provocateur! In the series’ second year, Ellis proves truly prescient when he introduces us to Gary “The Smiler” Callahan, a politican whose base is a far-right hate group… and whom the people vote into office, despite the fact that he’s not merely corrupt but evil. Callahan uses the power of his office to suppress Spider’s journalism — and even goes so far as to arrange for the City to be left defenseless when a Katrina-like “ruinstorm” threatens to kill thousands, in order to destroy Spider’s evidence and as an excuse to declare martial law. When Spider contracts an Alzheimer’s-like disease, will he be able to expose Callahan’s perfidy before he’s completely debilitated?

Fun facts: Originally published under DC Comics’s sci-fi Helix imprint, then switched to the Vertigo imprint (under the stewardship of Karen Berger), where it remained one of DC’s most successful nonsuperhero comics.