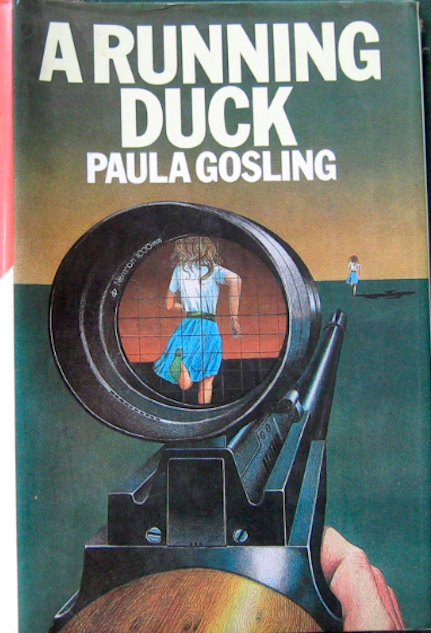 When successful advertising exec Clare Randell is shot — with a silenced gun — on a crowded San Francisco street, then nearly killed by a bomb in her apartment, the SFPD assigns the case to Lieutenant Malchek. He’s a former Army sniper still struggling to readjust to normal life after his stint in Vietnam; he specializes in setting traps for hit men and contract killers… because he understands exactly how their minds work. Using Randell as bait, Malchek attempts to draw out her would-be assassin — first in a fog-bound safe house, where there’s an atmospheric siege; and then on a tour of California’s redwood forests, where there’s a shoot-out. Randell struggles with her romantic feelings towards Malchek; he struggles with a suppressed instinct to become a ruthlessly efficient killer.

Fun facts: A Running Duck, also published as Fair Game, was named one of the 30 essential crime reads written by women in the last 100 years. It has been adapted twice: in 1986, as the cult classic Cobra, starring Sylvester Stallone and Brigitte Nielsen; and in 1995, as the truly terrible Fair Game, with Cindy Crawford and William Baldwin.