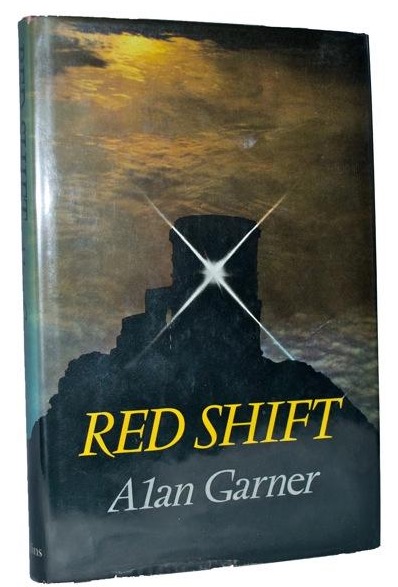 In what is perhaps his formally most ambitious work, here Garner — author of the classic children’s and YA fantasy novels The Weirdstone of Brisingamen (1960), The Moon of Gomrath (1963), Elidor (1965), and The Owl Service (1967) — depicts a present-day England overlaid by a disintegrating (Vietnam War-like) Roman Britain. In fact, we’re reading three intertwined love stories, only one of which is set in the present. Tom, an unhappy teenaager, lives in a caravan park in Rudheath with his parents; as he loses his grip on reality, the story’s protagonist becomes Macey, a soldier in Roman Britain who, when berserk, fights with an old stone axe. Macy and his fellow deserters kidnap a local tribe’s corn goddess; and eventually get their comeuppance. Thomas Rowley, meanwhile, finds Macey’s axe head in a burial mound during the English Civil War; when their town is attacked by Royalist troops, Rowley and his wife flee to a new home — where they embed the axe head in the chimney. In the present day, Tom and his girlfriend find the axe head — will it bring them good fortune? Or disaster? Themes, visual descriptions and lines of dialogue echo throughout the text.

Fun facts: Garner spent six years working on Red Shift, which he claimed was partially inspired by the Scottish legend of Tam Lin — where a boy kidnapped by fairies is rescued by his true love. David Mitchell’s Cloud Atlas was likely inspired by Red Shift; at any rate, Mitchell has called Garner one of his favorite fantasy authors.