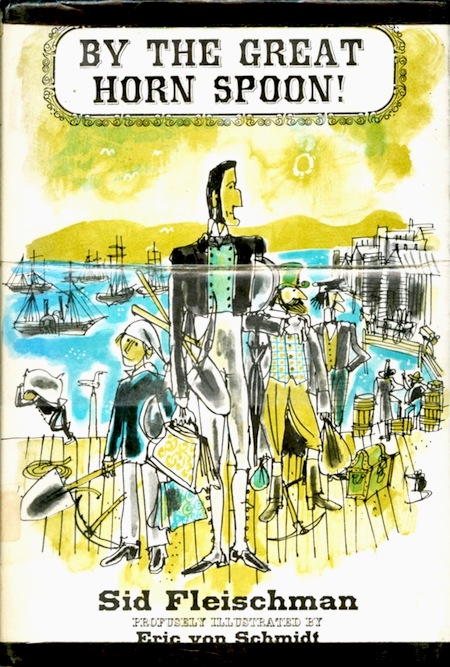 Sid Fleischman’s YA historical adventure By the Great Horn Spoon!.

Yet another terrific kids’ adventure spoiled by teachers who forced students to read it because it’s “educational.” Twelve-year-old Jack runs away from Boston, during the California Gold Rush of 1848–55, to seek his fortune in the west; his family’s English butler, Praiseworthy, tags along. They stow away on a steamship, during which they encounter the novel’s villain, Cut-Eye Higgins, and manage to foil one of his schemes. Unfortunately, Higgins escapes with another passenger’s map leading to a rich gold mine. In San Francisco, the greenhorns are befriended by colorful miners with monikers like Quartz Jackson and Pitch-pine Bill; equipped with mining gear, they head out to the diggings. No matter where they find themselves, Jack and Praiseworthy distinguish themselves by their keen analytic minds, hard work, and honesty; Praiseworthy also becomes known as something of a tough guy, who is renamed “Bullwhip” by their miner friends. Like all of Fleischman’s terrific picaresques from around this time — Mr. Mysterious & Company (1962), Chancy and the Grand Rascal (1966), Jingo Django (1971) — the characters are vividly dimensionalized, the language is terrific, and the historical contexts are brought to life in amusing — not educational, ugh — detail. In the end, will Jack and Bullwhip make their fortunes and return to staid, stuffy Boston? No!