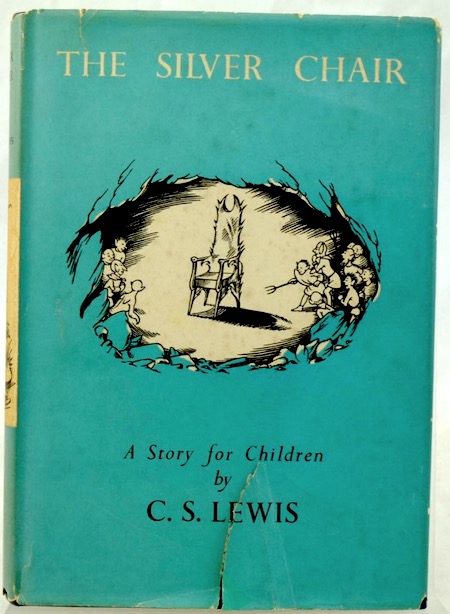 In the fourth Chronicles of Narnia installment, only a year has passed in England — but decades have passed in Narnia. Eustace Scrubb, the horrid Pevensie cousin whose attitude was transformed during the previous adventure, The Voyage of the Dawn Treader, is now a fine chap — who attempts to protect a fellow student, Jill Pole, from his own former gang of bullies at their soul-destroying progressive boarding school. Summoned to Narnia to seek the missing Prince Rilian, heir of the now-elderly King Caspian, Aslan gives the children four Signs to guide them on their quest; they are guided on their journey toward the giant-lands north of Narnia by an excellent, Oz-like new character, the gloomy Marsh-wiggle Puddleglum. Many adventures ensue, through fantastical and eerie landscapes: There is a sinister but glamorous Lady of the Green Kirtle, accompanied by a silent knight in black armour; Eustace and Jill are placed on the menu for a giants’ feast; an army of gnomes captures them as they voyage though a hollow-Earth-like Underworld; and they meet the Lady of the Green Kirtle’s protegé, an insane young man who must be bound to a silver chair every night — lest he turn into a deadly green serpent!

Fun facts: Recent editions of the book, in series which are sequenced according to Narnian history, list this as the sixth installment. I prefer to read them in their original publication order.