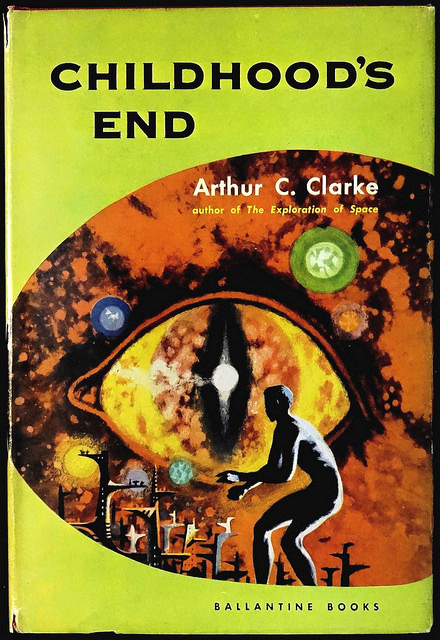 A Stapledonian epic in which an alien invasion is merely the prelude! In the late 20th century, as the US and USSR continue to jockey for global dominance, the skies above Earth’s principal cities are suddenly filled with vast spaceships. The aliens, who call themselves the Overlords, and who decline to reveal their physical forms, announce that they have arrived to usher in an era of peace and prosperity for all humankind. Fast-forward five decades, and Earth truly is a peaceful and prosperous place. But some curious souls demand to know what the Overlords look like, where they come from, and what their ultimate purpose really is. Astrophysicist Jan Rodricks stows away on an Overlord supply ship; meanwhile, the Overlords take particular interest in a young brother and sister, Jeffrey and Jennifer, in whom may lie the potential for humankind’s self-overcoming — whatever that might mean. Readers beware: When the truth is finally revealed, it’s mind-blowing.

Fun fact: Clarke considered Childhood’s End, which began life in 1946 as a short story, “Guardian Angel,” one of his favourite own novels. In 1972, not one but two British prog rock bands — Pink Floyd and Genesis — released (trippy) songs inspired by the book.