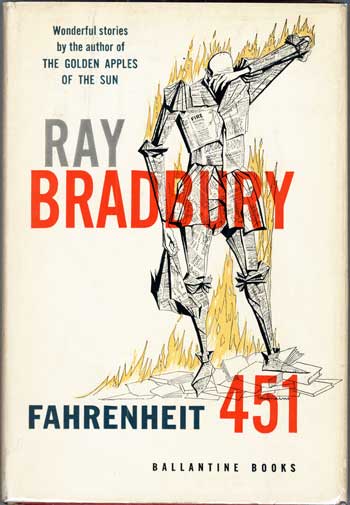 In a peaceful, complacent future America, books — along with all other vectors of critical thought — are forbidden. But Guy Montag, a “fireman” whose job involves burning books whenever a cache is located, is beginning to have doubts. His wife, like everybody else, seems content to spend all of her time watching participative soap operas, yet she attempts suicide — perhaps because her couch potato life is so empty. A gentle teenager, who loves to walk everywhere, in a car-dominated culture, and who asks probing questions, is killed senselessly, by a speeding driver. So Montag begins to read some of the books he was supposed to have burned… and soon enough, joins an underground effort to print and distribute books, and to discredit his fellow firemen. Once his own wife betrays him, Montag goes on the run. A powerful polemic about freedom… but also an exciting hunted-man adventure. Who can ever forgot the firemen’s robotic dog, trailing Montag with its super-sensitive yet lethal hypodermic snout?

Fun fact: Fahrenheit 451 is often described as the first sci-fi novel to cross over from genre writing to the mainstream of American literature. (It’s too bad that it’s taught in high schools, because that makes people dislike it.) Adapted, in 1966, as an amazing-looking (if a bit stilted) movie by François Truffaut. HBO released a TV film based on the novel in 2018.