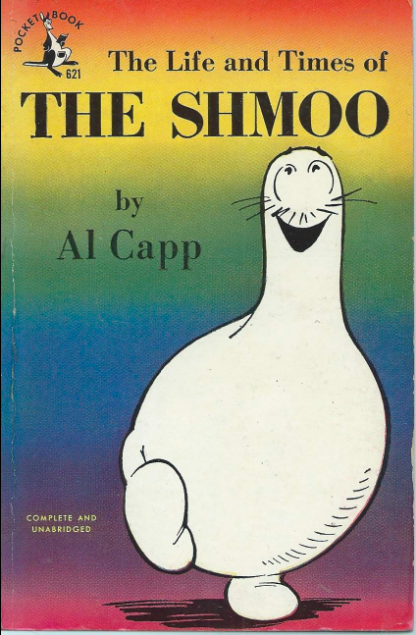 Al Capp’s satirical Li’l Abner adventure The Life and Times of the Shmoo.

Following a musical sound into the forbidden “Valley of the Shmoon,” Li’l Abner — the naïve, sweet-natured titular hillbilly protagonist of Al Capp’s long-running (1934–1977) newspaper comic strip — discovers a lost species, the Shmoo! Though warned by their keeper that the gentle and frolicsome Shmoos, which multiply exponentially, taste delicious (and love to be eaten), lay eggs and milk, and can be used for clothing, are a menace to humanity, Li’l Abner introduces the creatures to the world. An economic collapse results, since people no longer need to purchase food or clothing, or entertainment (they love watching the Shmoos frolic). J. Roaringham Fatback, the “Pork King,” orders a violent extermination campaign. Will Li’l Abner be able to rescue the Shmoos, or will greed and corruption triumph?

Fun facts: The Shmoo sequence appeared in newspapers during 1948; and that same year, The Life and Times of the Shmoo was released as a paperback. It’s been called the first cartoon book to achieve serious literary attention; it sold 700,000 copies in its first year. Shmoos were a huge pop culture phenomenon, spawning songs, dances, apparel, and endless tchotchkes, from dolls and games to jewelry and fountain pens. 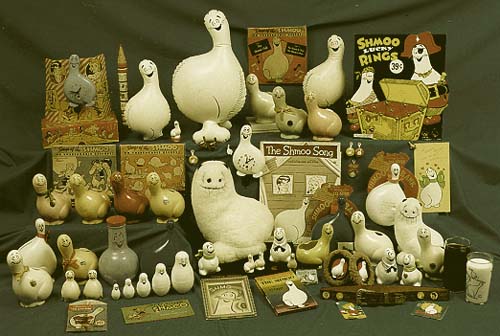