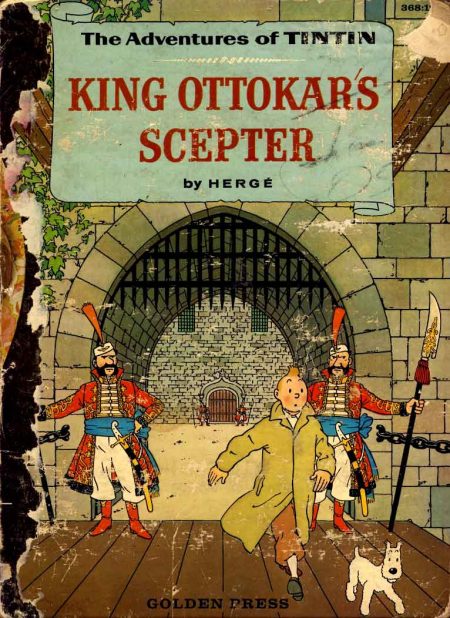 I’ve claimed that other Tintin adventures were my favorites, back when I was a kid in the ’70s — but I think that King Ottokar’s Sceptre really was the one that I returned to most frequently and joyfully. Stumbling upon a plot aimed at dethroning King Muskar XII, the rightful monarch of Syldavia — a fictional Balkan country that will also figure in Destination Moon and The Calculus Affair — our hero inserts himself into the action. And there’s a lot of action: Before Tintin ever meets King Ottokar, his apartment is bombed; he’s forced out of an airplane; he’s ambushed by thugs — escaping only thanks to the timely arrival of Bianca Castafiore, the opera singer whom we meet here for the first time; and he’s the victim of an assassination attempt! The drawings of Syldavian costumes, tapestries, and historical manuscripts are gorgeous; the plot against Ottokar is ingenious; and Tintin’s (and Snowy’s) efforts to retrieve the stolen scepter are utterly thrilling.

Fun facts: Syldavia’s neighbor, Borduria, is a fascist, proto-totalitarian state along the lines of prewar Hungary or Romania. Hergé intended King Ottokar’s Sceptre as a satirical criticism of Nazi Germany’s annexation of Austria in March 1938.