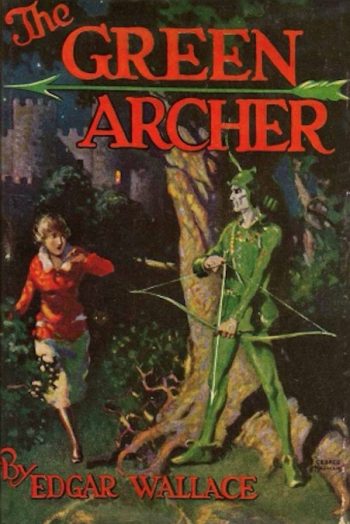 Abel Bellamy, a wicked American who wishes to get revenge on everyone who’s ever thwarted his desires, buys a remote castle in England — one equipped with secret passages and a dungeon. There’s a legend about a green-clad archer haunting the castle, but Bellamy doesn’t let that bother him; the castle’s grounds and hallways are patrolled by a pack of vicious guard dogs. His brother’s wife, Elaine, should have married Abel — particularly after the brother died — but she didn’t, so she must pay the price. Then there’s Abel’s nephew, who went missing during WWI… but not before bequeathing his inheritance to an American who wants to use Abe’s castle as an orphanage. And what about Valerie, the beautiful young woman seeking information about her birth mother — information that Abel alone can provide? Wickedness is afoot, but so is a mysterious green-clad archer who begins to lurk near the castle, dispatching Abel’s dogs and henchmen!

Fun facts: Adapted as film serials in the 1920s and 1940s, and as a German film in 1961. When Mort Weisinger created the comic-book character Green Arrow (for More Fun Comics in 1941), he took inspiration from the 1940s Green Archer serial.