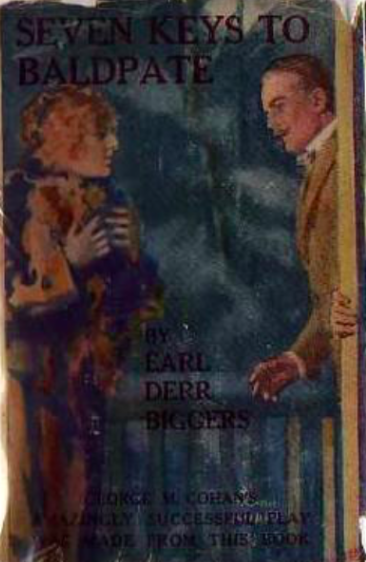 William Magee, a dime-store novelist who hopes that solitude will allow him to produce a great work of literature, acquires what he thinks is the only key to Baldpate, a New Jersey mountaintop resort that’s closed for the winter. Which may sound like the set-up of The Shining, but in fact this is an apophenic adventure. Six uninvited guests — a hermit, a peroxide blonde, a disgraced college professor, a political op, a bald-headed gangster, and a high-society dame — show up at the resort, each of whom tells Magee a far-fetched tale about who they are and why they’ve come. Magee finds himself caught up in a fast-paced plot, complete with witty repartee, that’s more far-fetched than his own stories. Is everyone involved in a crime caper of some kind? What are they up to?

Fun facts: Before Earl Derr Biggers invented his famous detective character Charlie Chan, this was his most popular book. It was adapted by George M. Cohan as a hit play, then several times as a movie; the 1935 version written by Cohan is the best-known of these.