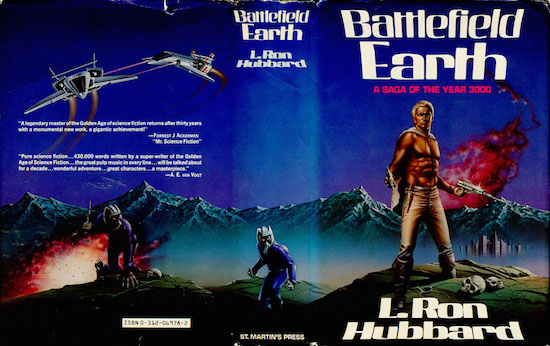 By the year 3000, Earth’s few surviving humans have been reduced to a state of savagery by their alien overlords, the Psychlos. (Cf. Edgar Rice Burroughs’s “The Moon Men.”) Jonnie Goodboy Tyler, the protagonist of this epic pot-boiler by the founder of Scientology, is captured in the ruins of Denver by a Psychlo who intends to use Jonnie and a Scottish tribe to mine a lode of gold in the Rockies. Jonnie and his new friends develop dirty bombs — which they use not only to free Earth from Psychlo control, but to bring destruction to the Psychos’ home planet. There’s an enormous amount of back story, as well as legalistic wrangling with other galactic species once the revolution has been won. We also may or may not find veiled references to the author’s theory that psychiatrists are evil.

Fun facts: Adapted in 2000 as a terrible movie starring and co-produced by John Travolta. In 2007, Republican presidential candidate Mitt Romney was ridiculed for naming Battlefield Earth as his favorite novel. With some reservations, I offered a defense of Romney’s taste in sci-fi lit. (Thanks, I guess, to my cousin Martin for giving me this book when I was 14.)