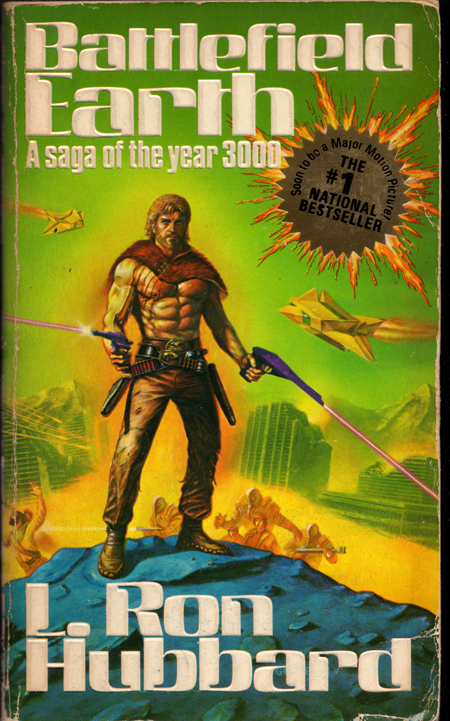 When asked recently by a Fox News interviewer to name his favorite novel, Mitt Romney’s answer, the 1982 science-fiction epic Battlefield Earth, raised eyebrows across the political spectrum. As if reassuring the general public about his Mormonism wasn’t enough of a hurdle for the GOP presidential hopeful, now Romney was praising a book by… L. Ron Hubbard, founder of Scientology?

[This item originally appeared at the Boston Globe Ideas section’s blog, Brainiac, in May 2007.]

“There must be something we can learn about Romney by examining this answer,” wrote Slate’s John Dickerson, capturing the sentiment of the pundit class. But after cracking a few jokes about the book’s far-fetched plot — in which a ragtag band of humans struggles to rid earth of its alien overlords — and Hubbard’s slipshod prose style, Dickerson shrugged his shoulders and lamely concluded: “You simply need a deep level of weird to like Battlefield Earth.”

Unlike the other pundits and bloggers who’ve weighed in on this topic, Dickerson admits that he hasn’t actually finished the book. But some of us who have devoured the 1,000-plus pages of Battlefield Earth bristle at the notion that there’s something inherently kooky about doing so.

In fact, Battlefield Earth — which touts the value of pulling yourself up by your bootstraps, overcoming the circumstances of your birth thanks to education and diligent effort, and fighting for a cause you believe in no matter how daunting the odds — is precisely the kind of all-American novel that most of our politicians only pretend to admire.

Still, there’s no denying it was a political gaffe. MSNBC talking-head Tucker Carlson told his viewers: “I am concerned about what our potential president is putting into his brain. Voluntarily reading L. Ron Hubbard, as a novelist, I think it’s a real red flag.”

The damage-control team mobilized, and Romney soon announced that Hubbard’s book was merely his favorite science-fiction novel, while his favorite novel was Twain’s Huckleberry Finn, just the kind of safe choice he no doubt wishes he’d started with. This prompted the Boston Herald headline, “Mitt’s new flip-flop is out of this world.” 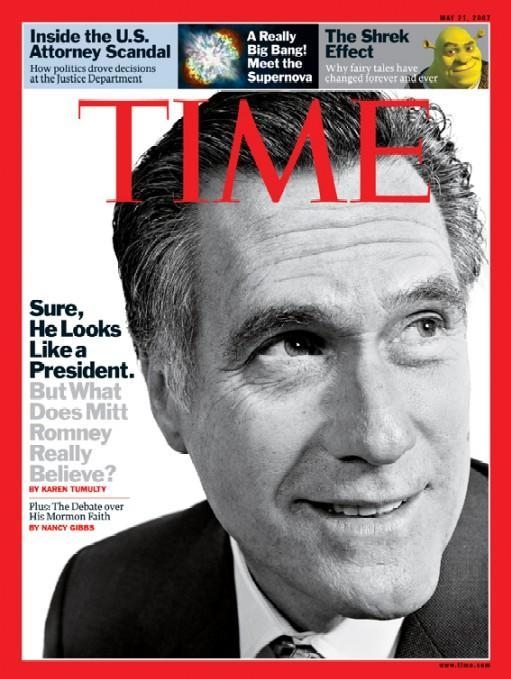 And yet, Romney’s favorite book doesn’t suggest that he’s a closet Scientologist. Battlefield Earth is straight-up pulp fiction, like the innumerable science fiction, fantasy, and adventure stories and novellas that Hubbard — employing red-blooded pseudonyms like Lieutenant Scott Morgan, Joe Blitz, and Winchester Remington Colt — penned in the 1930s. Hubbard himself said that Battlefield had nothing to do with Scientology, the religion he developed out of Dianetics, a self-help technique he’d invented in the late ’40s. This reader agrees: Unlike the symbolically loaded Narnia books of C.S. Lewis, for example, religious apologetics are nowhere in evidence in Battlefield.*

Instead, the book’s plot concerns Jonnie Goodboy Tyler, a primitive tribesman who learns, after he’s captured in the ruins of Denver by a fearsome alien named Terl (played in the 2000 movie version by a dreadlock-sporting John Travolta), that earth was conquered by Terl’s race 1,000 years ago. Jonnie decides to teach himself all of humankind’s forgotten science, then use the knowledge to defeat the aliens. By the end of the story, Jonnie has not only freed the earth but united the rest of the universe in the interstellar struggle against tyranny.

True, the book isn’t particularly well-written. I discovered it when I was 15, and although I was an omnivorous reader, even then I recognized that Hubbard was nowhere near as talented a stylist as Edgar Rice Burroughs, Dashiell Hammett, Philip K. Dick, or certain other pulp authors. That said, Battlefield is no worse than some of the lesser works of, say, science-fiction giant Robert Heinlein (who called it “a terrific story”).

Battlefield falls in a well-established sub-genre of speculative fiction known as “post-apocalyptic.” These novels center on an alternate reality in which life as we know it has been dramatically altered — by flood, fire, famine, or by nuclear war, environmental catastrophe, a pandemic, meteorites, or even alien invaders. Indeed, it could easily be argued that fans of post-apocalyptic fiction are big-thinking idealists. Readers of Battlefield Earth and its ilk aren’t weird; they’re worried about where our society is headed, and whether we have what it takes to defend our way of life. The real weirdos are those who never give a thought to such things.

So what might Romney’s bedside reading reveal about the former governor of Massachusetts? OK, maybe it indicates that he’s an overgrown adolescent lost in fantasies about saving the world…or that his high school teacher should have introduced him to superior post-apocalyptic novels, like Nevil Shute’s On the Beach, Kurt Vonnegut’s Cat’s Cradle, or Walter M. Miller Jr.’s A Canticle for Leibowitz.

But it might also mean that Romney, despite all the flip-flopping, is more like Barack Obama than some might like to believe. That is to say, he’s a starry-eyed idealist, someone who believes that another world is possible.

And if idealism — and enjoying schlock fiction — means you’re crazy, I don’t want to be sane. 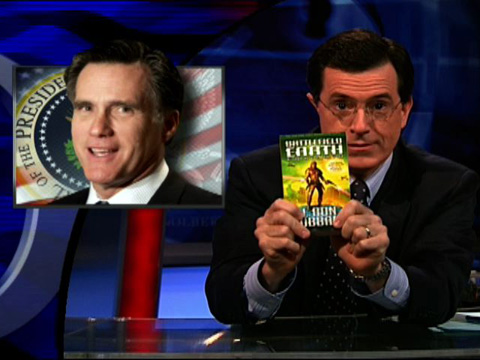 * Two readers took issue with my assertion that Battlefield Earth has nothing to do with Scientology.

I agree that the universal disdain for the book is unwarranted (and partly a result of the film adaptation’s utter awfulness), but I disagree that the book has nothing to do with Scientology. In the last act of the book, as Johnny is meeting with the heads of all of the non-Psychlo species in the Universe, he learns the twisted history of the Psychlos, who were deceived by an evil overlord race called the “Catrists.” Psychlo – Catrist… Psychiatrists?

Bill directs our attention to a Wikipedia entry on Battlefield Earth, which argues that the battle between the noble Psychlos and the evil Catrists reflects Hubbard’s — and Scientology’s — animus towards psychology and psychiatry. Meanwhile, a much less sympathetic reader, Tim M., writes:

This is simply not true. In fact, the article on the novel Battlefield Earth at Wikipedia.org has a section that specifically deals with the Pro-Scientology themes in the novel. While it’s perfectly understandable that casual readers of “Battlefield Earth” may not be aware of these themes and parallels, it is disingenuous to state they aren’t in evidence.

OK, it’s possible that Battlefield does obscurely reference one of Hubbard’s/Scientology’s hangups, in one short episode near the very end of the book — despite the fact that Hubbard claimed otherwise. However, it’s unlikely that Mitt Romney, or most readers, noticed. Obviously, I didn’t.

In September 2006, Joshua Glenn launched Brainiac, a blog published by the Boston Globe’s Ideas section. He retired from Brainiac in June ’08, to pursue new projects; in February ’09, he cofounded HiLobrow.com. This post is the fourth in a series of ten commemorating Glenn’s brief tenure as a professional blogger.