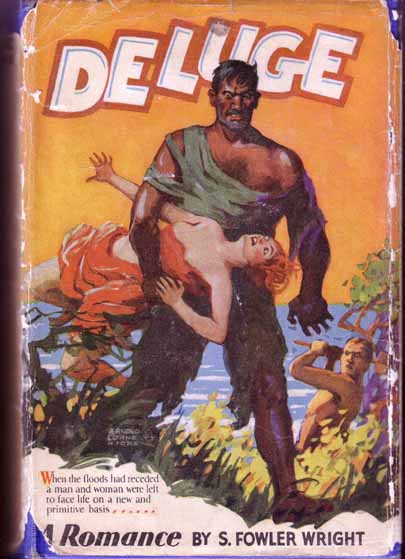 A global upheaval turns oceans into deserts, and sinks land masses everywhere — except what remains of the English midlands, which are transformed into an archipelago. Martin Webster, a former lawyer, meets Claire Arlington, an athlete (“like a valkyrie”) and one of the few women to survive the flood. The two store up food, fend off feral dogs, and battle sex-starved and flood-maddened miners, laborers, and vagabonds. A shocked Time Magazine review includes the following description of one scene: “A relic of civilized scruple holds Martin from killing a hairy giant furnaceman, because he has sprawled over the tracks and technically is down. But Claire sees the prostrate giant heave a rock, and, with no scruples, jabs him, hacks, thwacks, kills, saving Martin’s life.”

Fun fact: Wright self-published Deluge some years after writing it, then sold the film rights to Hollywood — after which the US edition of the book became a bestseller.