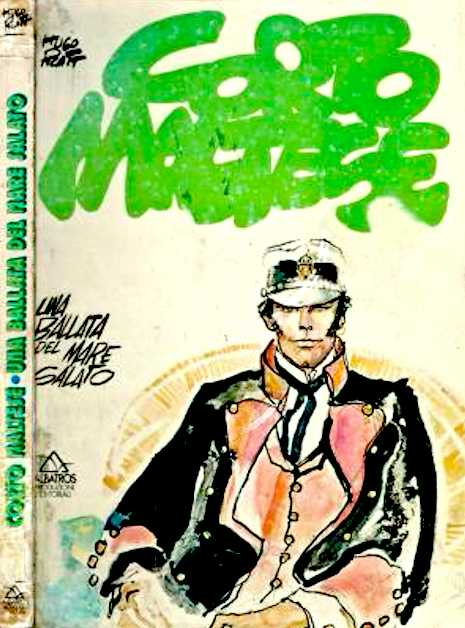 In 1914, just prior to the outbreak of World War I, a sinister rogue named Rasputin is up to no good, circumnavigating the islands north of Australia in a catamaran crewed by Melanesian natives, when he picks up a sailor who’s been marooned by his own crew: Corto Maltese. (This is an anti-heroic entrance worthy of John Wayne’s in Stagecoach.) In subsequent adventures, we’ll learn that Maltese, the son of a British sailor and an Andalusian–Romani witch and prostitute, was born in Malta, participated in the Russo-Japanese War, and sympathizes with underdogs… but in this, the first Corto Maltese adventure, he is a pirate. Ballad of The Salt Sea is a tangled yarn — pirates, a German lieutenant, cannibals, wealthy Australian heirs held for ransom, a young Maori navigator, and an evil criminal genius in a hooded cloak all play important roles. Everyone betrays everyone else; Corto Maltese himself, though likable, can’t be trusted.

Fun fact: Pratt’s artwork is gorgeous — the missing link between Milt Caniff and Frank Miller — and exegetes claim that he did extensive research, on everything from native tattooings to warships. Along with the first Tintin and Asterix books, Ballad of The Salt Sea was voted by the French public as one of Le Monde’s “100 Books of the Century”.