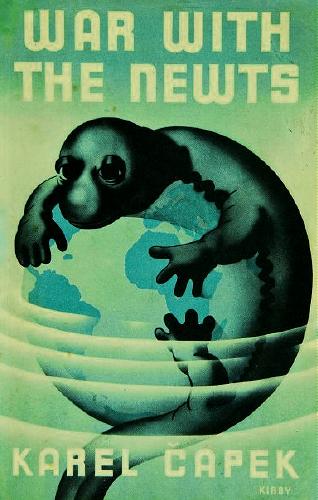 The light-hearted first section of the book, which skewers European attitudes towards non-white races, recounts the discovery of an intelligent but child-like breed of large newts, on a small island near Sumatra… and their enslavement and exploitation in the service of pearl farming and other underwater enterprises. The Newts develop speech, and absorb aspects of human culture. In the book’s second section, the Newts began to rebel against their masters — hello, Planet of the Apes. The final section of War with the Newts is darker in tone: It recounts the outbreak of war between the Newts and humans. The British, French and Germans are portrayed as stubborn and nationalistic; and we hear from a German scientist who has determined that the German Newts are actually a superior Nordic race, and who invokes lebensraum to justify their destruction of portions of the world’s continents. The final chapter is a metafictional exercise in which the Author and the Writer discuss what will happen next: The Newts will destroy the world’s landmasses and enslave humanity.

Fun fact: Sci-fi scholar Darko Suvin has described War with the Newts as “the pioneer of all anti-fascist and anti-militarist SF.”