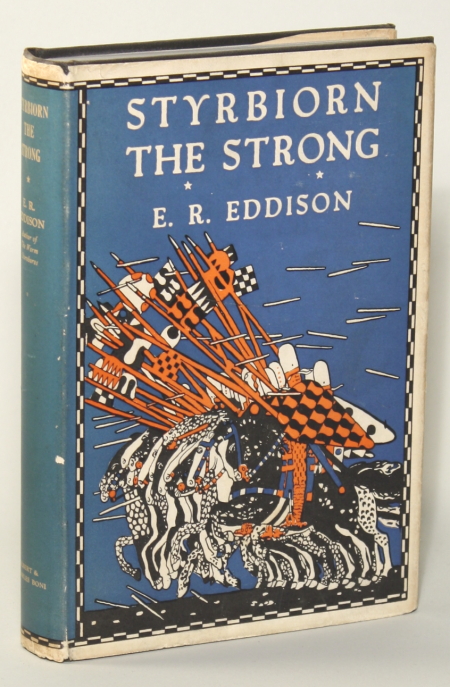 In the 10th century, Styrbjörn Olafsson, heir to one-half the Swedish throne, was known both for his remarkable size and strength and for his quarrelsome and rather dim-witted, though good-hearted nature. Shooed out of Sweden by his uncle, Eric the Victorious, who insisted that Styrbiorn demonstrate some maturity before he assume his late father’s place in the kingdom, Styrbiorn becomes the leader of the Jomsvikings before attempting to overthrow his uncle in the Battle of Fýrisvellir. Eddison’s retelling of this minor Norse saga is exciting and fun — if a bit heavy going at times, because of the archaic language which the author deploys to somewhat better effect in The Worm Ouroboros (1922) and the Zimiamvian Trilogy (1935–58). After a dramatic shipboard duel, Styrbiorn becomes a leader among the Vikings. Returning to Sweden before his three years are up, he winds up in bed with his uncle’s wife, Sigrid the Haughty… who persuades Eric to exile Styrbiorn and deny him his birthright.

Fun fact: There are no words derived from Latin or Greek in Styrbiorn the Strong.