Regression Toward the Zine (19)

PREVIOUSLY: The zines Idiotooth, Mommy and I Are One, The I Hate Brenda Newsletter, and X Magazine from the Joshua Glenn Zine Collection. 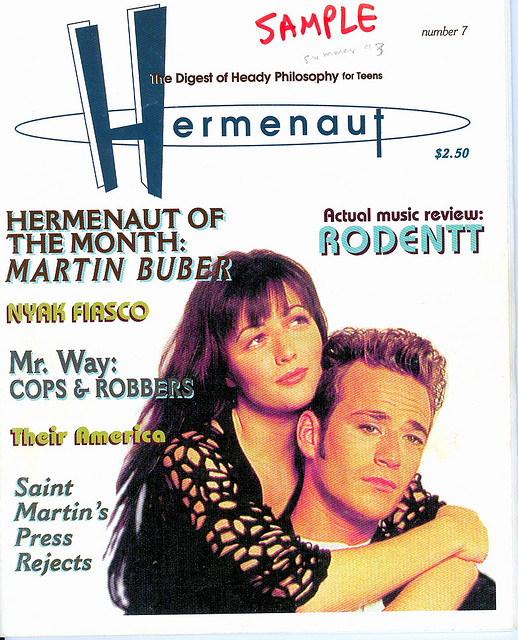 In 1993, my fiancée Susan and I moved from my hometown of Boston to hers, or rather the one right next to hers: Minneapolis. Hermenaut #7 was published during the winter of 1993-94 — what I penciled on the cover shown here, at some later date, is inaccurate.

ISSUE 7: Printed, b/w. 50 interior pages. Print run of 500. Margaret Blonder, John Cradock, Scott Hamrah, and Susan Roe were listed as editorial staff. Jennifer Engel was art director. I can’t remember if Jennifer laid out the pages before I left town, or if we did it by mail? Collaborating online was not an option in 1993.

COVER: Shannen Doherty and Luke Perry of 90210. Cover designed by Chank Diesel, a Minneapolis designer and fontographer I met soon after moving there. (Chank published my essay on the Cocktail Nation phenomenon in his music magazine, Cake — I consider that my first outing as a journalist/culture critic.) For reasons known only to himself, Chank used Photoshop to switch Shannen and Luke’s eyes. Chank also tweaked the Hermenaut logo, making it a bit snazzier. 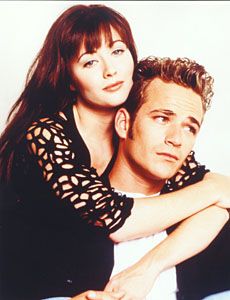 CONTENTS: Scott Hamrah’s "Thus Spake Cinderfella" discussed Jerry Lewis’s career in the 1970s, including the ill-fated "The Day The Clown Cried." Phil Milstein, a friend of Scott’s, contributed an essay titled "Ask Burt What He Is," an enthusiastic close reading of Burt Reynold’s 1973 album "Ask Me What I Am." Ingrid Schorr’s "Archetypal Roles in ‘Beverly Hills 90210,’" which compared Kelly to Aphrodite, David to Hephaestrus, Dylan to Poseidon, and so forth, remains one of Hermenaut’s most beloved essays. Margaret Blonder contributed another cartoon about aliens, titled "Nyack Fiasco." Slotcar Hatebath’s "Their America" tackled the phenomenon of TV-concealing furniture. Mr. Way’s "The Way of Etiquette" addressed the topic of "Cops and Robbers." I wrote the lead essay on "Das Unheimlich" (about E.T.A. Hoffman, Philip K. Dick, "Calvin and Hobbes," and Baudrillard), an essay on portrayals of liberated women in 1970s movie novelizations, and a review of a live show by Jamaica Plain’s excellent lounge act, Rodentt. HERMENAUT OF THE MONTH: Martin Buber. 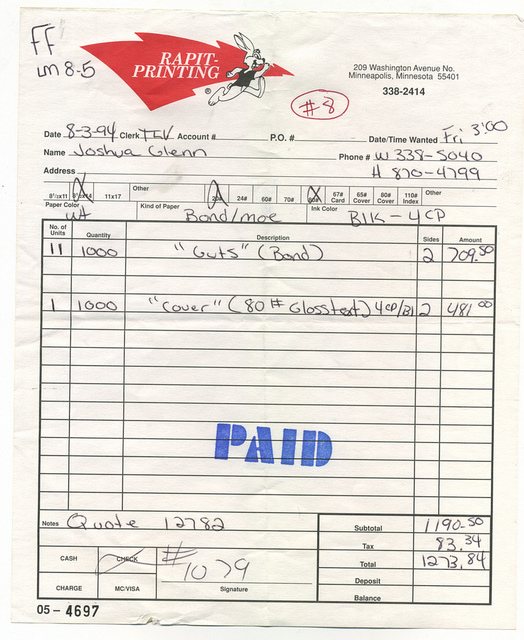 I’d applied for a job at a Minneapolis Kinko’s, so I could run off copies of Hermenaut on the sly, the way we’d always done it in Boston, but I was rejected. (I went to work instead as a bartender, waiter, and pin-setter at Bryant Lake Bowl, a newly opened restaurant-lounge set in an old bowling alley.) Chank convinced me to have issue 7 printed — instead of photocopied. Thus Hermenaut began its metamorphosis from zine to what it eventually was to become. From that point on, we printed Hermenaut.

The invoice above is for issue #8, which came out in the summer of 1994 — as you can see, we jumped to 1,000 copies. Why? Because the magazine Sassy named Hermenaut its “Zine of the Month.”

Sassy resented us for mocking them — but paid us a serious compliment anyway, which was nice of them. The subscriptions came rolling in! 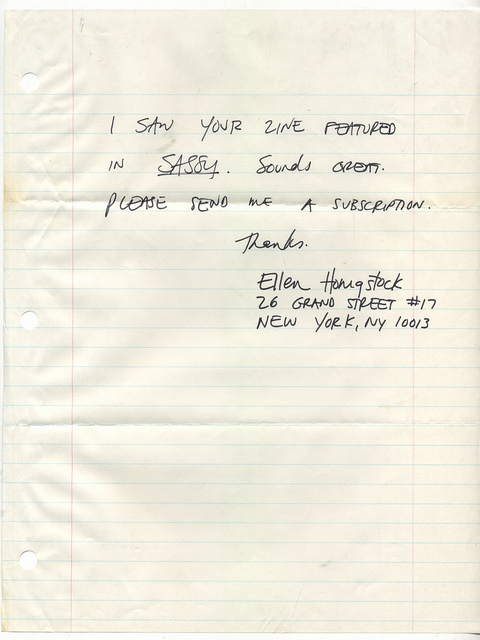 At that point, we still couldn’t afford to have the zine perfect-bound. In fact, we couldn’t afford binding of any kind. We threw collating and stapling parties at our apartment.

Except for the year I took off from college, this was the most carefree period of my life. Out of school at last, working odd hours at the restaurant, publishing Hermenaut, engaged to Susan, no children yet. I was living in a new city, which turned out to be great place; and I was actually writing for publication. 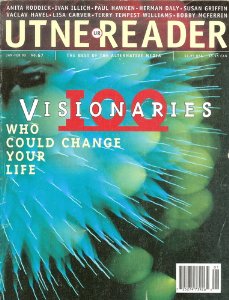 Then I had to go and screw things up by taking a full-time job at the magazine Utne Reader. I don’t love working full-time, but this was a great opportunity — especially considering the fact that I had no credentials as a magazine editor; in college and grad school, I hadn’t even studied Journalism or English. The editors of Utne Reader took a chance on me, because they liked Hermenaut.

During the couple of years I worked at Utne Reader, I aggressively requested review copies of zines — and purchased zines — in order to get as many of them as possible into the pages of the magazine. 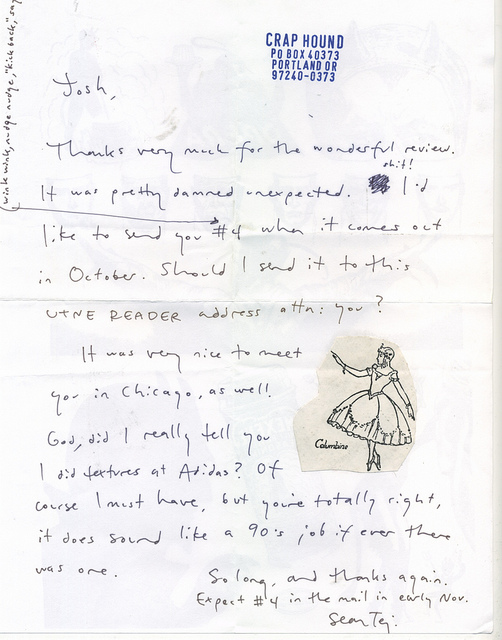 Zinesters tended to be quite suspicious of overtures from Utne Reader, which they didn’t consider a DIY publication — though in fact it was an independent magazine. 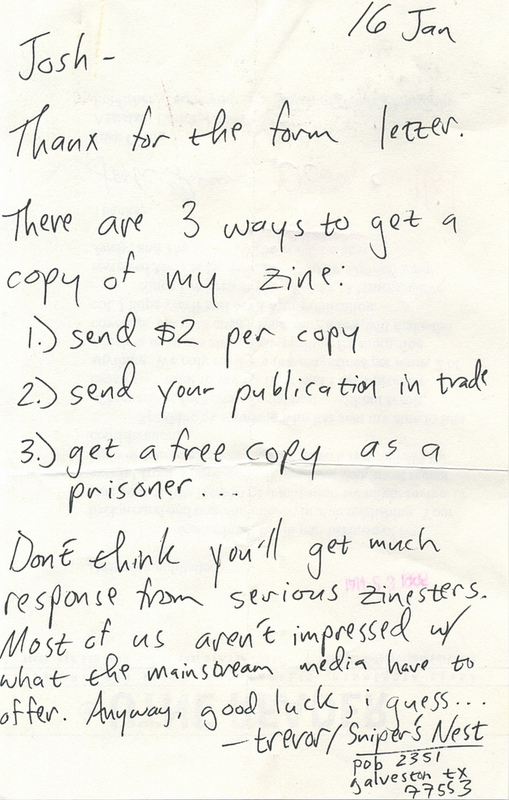 In 1995 I began including the following FAQ with my requests for review copies of zines.

Q. What do you do at Utne Reader?

A. I was hired as an editorial assistant a year and a half ago after I sent a copy of my zine Hermenaut to the editors; apparently they liked it. Now I’m the Associate Editor, which means I do everything from editing cover sections to washing the dishes. I am in charge of the magazine’s Mixed Media section, where we review books, videos, CD-Roms, and — increasingly — zines. Since I’ve been here we’ve excerpted, reviewed, and otherwise mentioned dozens of zines. I’m proud that we’ve mostly managed to avoid talking about zines the way the mainstream does: “They’re so zany and wacky, these crazy kids!” We don’t regard zines as a hobby, a fad, or a joke.

Q. What’s your definition of “zine”?

A. That’s a much-argued question among zine publishers. Factsheet Five, which most of us regard as the definitive catalog of the zine scene, defines a zine as “any small press publication with a press run of between 15 and 2,500.” This numerical definition is too limiting, if you ask me: A zine made for five readers is still a zine; and so is Rollerderby, whose circulation is well above 2,500. Factsheet Five goes on to claim that zines “aren’t slick, they aren’t professional quality, and they don’t make a profit.” I reject this authenticity-mongering definition too. The publishers of zines like Motorbooty and Ben is Dead try to make their zines slick and professional-looking. And if a zine publisher makes a profit, shouldn’t that fact be celebrated by the zine community? I agree that profit should not be the motivating force behind a zine’s existence — but success does not automatically mean selling out. In my opinion, a zine is any publication whose editorial content is not driven by market forces. Therefore, I would call Factsheet Five a zine, despite its large press run and profitability.

A. I’m fascinated by the emergence of a new phylum of zine, what Factsheet Five calls “independently produced magazines” but which I call “emerged” zines — like Motorbooty, Ben is Dead, The Idler, Bunnyhop, and many others. I aspire to make my own zine as handsome and carefully produced as these are. Without selling out, of course.

NEXT: Zinesters vs. journalists, a 1996 Q&A with Josh Glenn.