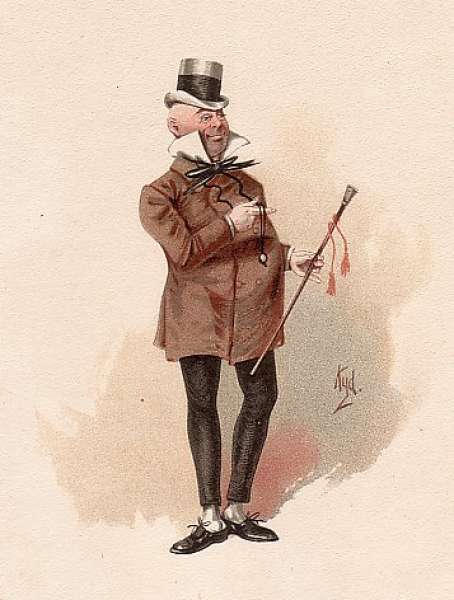 HILOBROW has invented a holiday! It henceforth will be celebrated each January 18 — the date (in 1935) on which George Cukor’s excellent film adaptation of David Copperfield was released. W.C. Fields brilliantly portrayed Micawber in that movie.

Wilkins Micawber is one of our favorite fictional idlers. He was introduced to the world in 1850 by Charles Dickens, who lovingly based the character on his own father. Because the hapless Micawber is forever in debt, the scheming Uriah Heep assumes that he must be dishonest — like himself. Not so! Micawber is an honest man, whose troubles are entirely due to his unwillingness to seek and inability to hold down a job.

‘You find us, Copperfield,’ said Mr. Micawber, with one eye on Traddles, ‘at present established, on what may be designated as a small and unassuming scale; but, you are aware that I have, in the course of my career, surmounted difficulties, and conquered obstacles. You are no stranger to the fact, that there have been periods of my life, when it has been requisite that I should pause, until certain expected events should turn up; when it has been necessary that I should fall back, before making what I trust I shall not be accused of presumption in terming — a spring. The present is one of those momentous stages in the life of man. You find me, fallen back, for a spring; and I have every reason to believe that a vigorous leap will shortly be the result.’

Known for his credo “Something will turn up,” Micawber’s name has become synonymous with someone who lives in optimistic expectation of better fortune, but won’t lift a finger to make it come any sooner.

Readers, we’d like to wish you the first of what we’ll sure will be many happy Micawber Days to come. Enjoy!

About Josh, Haw-Haw, Idleness, Most Visited