Fifth in a series of posts suggesting gifts for the hilobrows in your life this holiday season. 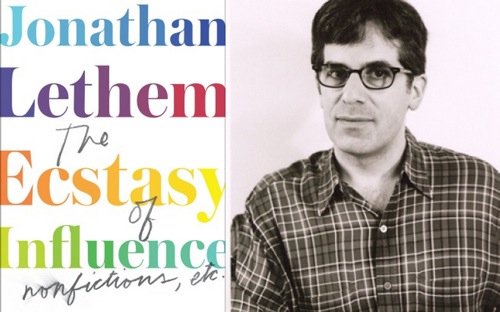 The Ecstasy of Influence is a “hefty and remarkable new miscellany,” according to the New York Times. It’s a large collection of Lethem’s intellectual, semi-autobiographical, mostly nonfictional essays from the past several years. It’s a performance piece. The book’s title references Lethem’s 2007 Harper’s Magazine remix of others’ writings about plagiarism and creativity.

Call it a mashup.

“It’s absolutely stultifying, it’s brilliant, it’s repetitive, it’s contradictory. It just might contain the secret of the universe.” That’s how Lethem once described Philip K. Dick’s Exegesis, a paranoid, scholarly, never-finished, Arcades Project-like collection of typed and handwritten notes, journal entries, letters, and story sketches in which PKD wrestled with the religious visions that he began experiencing in the 1970s.

In November, Houghton Mifflin published The Exegesis of Philip K. Dick, a 1,000+ page doorstopper co-edited by Lethem. Who said, recently, of the new book:

[Dick is] trying to take the chaos of reality, of his experience of the universe, and put it in some kind of order, and mostly failing. The book represents an endless series of restarts. Every morning he gets up and thinks: no, no, no throw it all out. Here’s how everything works. He begins the book a hundred times. What we did was to try and embrace the best material, distill it, remove the repetitious stuff, and bring it into a framework where you could approach it. It’s not a book that reads like a narrative. It doesn’t get anywhere. It’s an endless meditation on existence.

These are two of the most important books of 2011 — give ’em both as gifts!