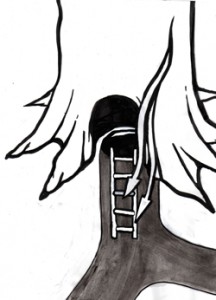 The story so far: Linda called a comet which plunged into the earth and started spewing dust everywhere, in ways and with effects explained in the last episode. She then set out on her long deferred retirement travels, and is enjoying them. She just toured New York City and Niagara Falls, and is now setting out for California.

Linda is moving west and something moves beneath her. Linda is moving across the country while under the ground some dark thing shadows her, displacing as it does mostly dust but sometimes sunken stuff from under sunken houses. She does not and need not know of the papers buried in dirt that are chewed up and displaced by this shadow of her own advancement west. There is so much earth to be dug, so much preparation necessary for the hollow, but Linda is to enjoy for just a bit longer her movements across the country’s surface. Meanwhile, a tunnel grows under Linda, a lateral tunnel just big enough for a shortish lady to walk upright in. The tunnel cuts through the toplayers of civilizational sediment, photographs and letters and fragments of ceramic ashtrays made in grade school that have sunk through basement floors, worked their way down into the dirt. It is the beginning of a threading of the crust of the world, the preparation of the hollow is a threading of the crust of the world. It cannot begin without this threading, but whether it is a becoming-fragile or a becoming-indistinct I have not yet figured out. The threading work is done by moles, why not. Moles transported to the earth in the cavity of a comet, and more moles awakened by the presence of interplanetary brothers. For years and years the mole has been suggesting itself as a totem, and only now, as I imagine Linda, is the utility is becoming clear. If there was a period of shrinking and puttering of my own that I thought was the meaning of the mole, I now understand the mark of the mole is not upon me but upon Linda, or upon me only by virtue of Linda. And that certain things come into your possession in advance of their being needed at all, or knowing for whom they are intended. A vehicle, after all, a vehicle for incursions, in the shape, in this case, of moles, and even in the shape of a song I sang six years ago, and which I now understand was a transmission from the future, a transmission for Linda, or not for Linda exactly but for the moles now joined in this threading of the crust of the earth, a great cabal of them put to work for Linda. So you can imagine a team of moles or a very large mole or a mole the normal size of a mole but acting cross-dimensionally in such a way that the accuracy of scale is an irrelevant question (it being the form of mole action and not the actuality of the mole that makes the mole belong here, under Linda’s feet, threading a tunnel to the west), you can imagine this mole with its humeral rotation, the arms pointing directly side out of its body like the stick arms of a snow man, moving through dirt performing a transcontinental breast stroke. And you can forget about what Linda is seeing for a while and just try to sense this tunneling action happening 20, 30, 50 feet down from where she is walking, or driving, or sleeping (when she sleeps the moles stop tunneling and hollow out a chamber), creating a tunnel headed west just large enough for a shortish woman to walk upright in. The tunnel is made secure by the compression of the displaced earth into a dense circular wall. And every now and then the mole stops as if to take a sounding over something still deeper, and there is let’s say a singing noise or some kind of calling noise which causes a small jet of dirt to push directly up, spouting in Linda’s wake, though she does not notice. Out of these blowholes come dirt and old papers and cigarette butts and plastic parts of chewed up dogtoys and sometimes hamster bones and time capsules and even arrowheads.

Linda, unaware of sediment or old paper or moles, is right now taking a tour of movie theaters. When she was young, she dated a projectionist, and spent hours in the boots watching luminous romances cast out across hot dust toward the screen. She knows how to work the old reels, and so has decided to move from town to town finding the older theaters, not the multiplexes but the ones with a single screen. She has stolen from some library reels of old romances, and watches in town after town her old favorite movies, especially Brief Encounter or The African Queen. She has gotten as far as Pennsylvania, has entered a small theater in Scranton. In a short blast of air from underground, a pile of paper has been blown up, and when she leaves the theater she will find it, and she will pick up a paper typed on two sides, and she will read what is written, which is this:

“I left my dog in Pennsylvania and wrote this to you:

There is a blue that combines time and distance, a kind of grey between blue that renders indistinct the built and the sky. I always come back to it in a particular city, on the balcony of a new friend’s apartment, private, daily. The color an expansiveness offset by a luminous red hotel sign, scaling neon translated above Moskva Ter. The red, too, participates in the cast, blurry as if you’d just been crying and you were driving and it was night and the traffic lights flared out in sharp stars like you might draw on a binder at a time in life when you drew on binders and listened to a lot of I don’t know Zeppelin and high, pressed your eyelids to see the advance of an unearthly yellow against the black, which was good. A red indistinct like that but softer because you are still and on a balcony and the red enters this condition of fuzz against blue, soft because blue is after all famous for being the color of sky and therefore an ambassador of width. A color of broad cast, and so erasure.

It always, this blue, occurs outside. It couldn’t describe an emotion and doesn’t belong on fabric. Its actual is width plus vantage–down a valley or up a hill, a color imperceptible except on a pitch that stops you recalling that you participate in this place, this city, maybe you even live here, you little moving thing, because the pitch set you at the edge of this expanse now colored wide and indistinct. It produces a speech-deferring humidity in the lungs. It argues against the point and for the period of an ellipse as the only possible description of a moment, as the only practical way to know your own retrospection, prospection, introspection, pection. Not at all divine maybe just it’s a verbless blue, yes: not the activity of stilling but the still itself. Not the category of diffusion but a plain fact, like the sky is blue: baby simple, Leonard Bernstein.

It’s visible here, too, from the BQE if you are returning from Queens, or from New England, at the right speed and the right time in relation to the sun. The clock is irrelevant, it’s a relationship to the sun, and so desperately un-newyorkcityish, but it does forestall desperation, that’s its gift. Also more secretly drained of tint from a moving car on certain streets in Brooklyn, like Bedford Avenue where it splits at the equestrian statue, any moment and any city of enough greyness and Petersburgian width. I’ve never been to St. Petersburg, but I understand the streets are wide there, that buildings can’t exceed in height the space of the street. I like this idea. I imagine St. Petersburg is the origin and font of this blue, just as the some mountain pass in the Caucuses is the origin of the apple, something known by Nikolai Vavilov, whom I once tried to channel. I imagined he could warn us, like Princess Leah, holographically in electric blue, of seed variety and precipitous loss. During the siege of Leningrad his laboratory full of potato and apple varieties collected from around the world also housed fourteen starving scientists who wouldn’t eat the plants, and every day this color comes. Dmitri Shostakovich’s fifteenth string quartet is this same blue drained now of all tint and translated to inky brown and almost silent, certainly deferred. It is the same suspension but in a room, its actual is a room in St. Petersburg with carpet and belongings and even if there is light there is no light, this is the color of this music. Verbless evacuation.

This is why I decided to paint my apartment silvery grey. This is why I took photographs of potatoes all day. I don’t know exactly how much I save, but I think it is substantial.” 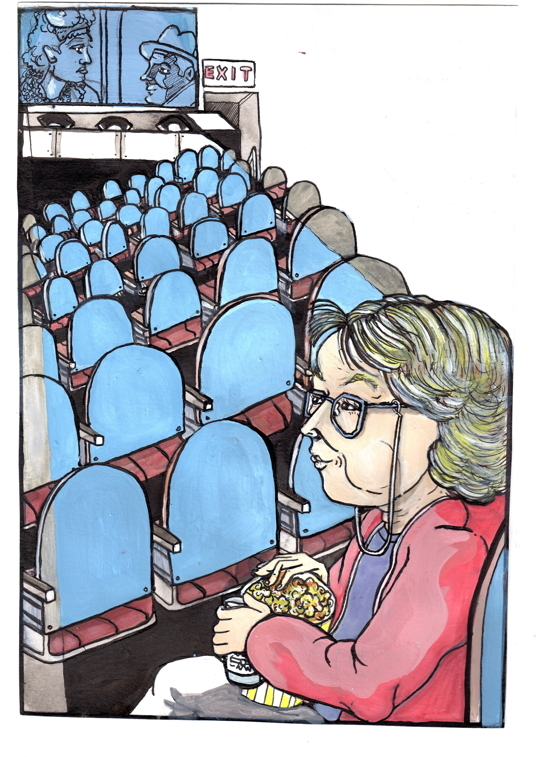 And now, listen to the song in the Linda song cycle, transmission from forgotten planet (mole anthem) (and that is a distorted uke):

NEXT WEEK: Linda nears the coast, finds herself in her own transmission from the future. Stay tuned!