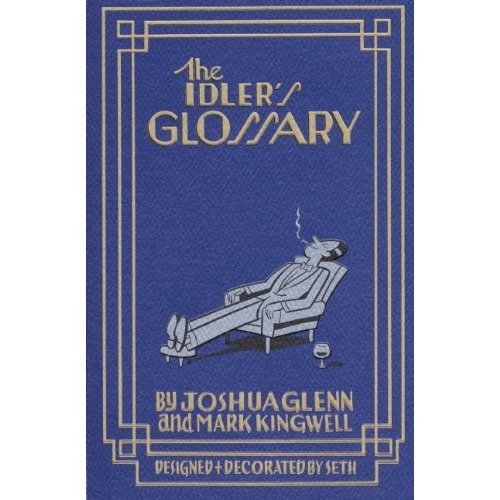 As previously announced, Mark Kingwell and I have collaborated on a sequel to The Idler’s Glossary (2008). Available for sale now, The Wage Slave’s Glossary criticizes and analyzes what the Lowell Mill Girls were the first to name wage slavery, as well as what Mark calls the work idea itself.

Published just before the Great Recession of 2008, the Idler’s Glossary took an irreverent approach to the centrality of work in our daily lives. Mark’s Introduction argued that the values of work are too dominant in too much of life… and noted that they’ve created a host of phrases and terms which help sustain the fiction that work as we know it is a natural, inevitable, and permanent state of affairs. My glossary commented on two hundred-plus such phrases and terms, in alphabetical order, from Amusement, Beautiful Loser, and Couch Potato to Truant, Vacation, and Whiling Away the Hours.

In January 2009, Mark and I were interviewed by the Stanford University’s student-run newspaper, The Progressive. Here’s that interview.

PROGRESSIVE: First, the basics. What is an idler? How does the idler fend off boredom?

GLENN: An idler is a person — historical examples include Socrates and Oscar Wilde — who, despite the pejorative sense in which we often use the term, is neither lazy nor useless. Nor does she shirk work, duties, or other obligations; nor does she resent bosses and bossy family members who think she should be working. Instead, she has revalued the values of our work-centric culture; she has rid herself of those beliefs, attitudes, and constraints that limit our freedom (by making the 9-to-5 life seem natural, inevitable, and eternal). Far from being bored — a paralyzing compound of restlessness and apathy that afflicts non-idlers, who dimly sense that they’re trapped in an invisible prison — she is energetic and engaged with life. Not that you can always tell, just by looking at her, you understand.

KINGWELL: It’s interesting how often boredom comes into the issue — it’s thematized right at the beginning of my introduction, for example. The reason is that boredom is closely linked to the world of work and its norms of occupation, production, and consumption. Boredom is a kind of stall between first- and second-order desires: when I’m bored, I have a wish for a desire but find no particular desire worth desiring. The idler is never bored, because there is perfect attunement between his wishes and his desires. 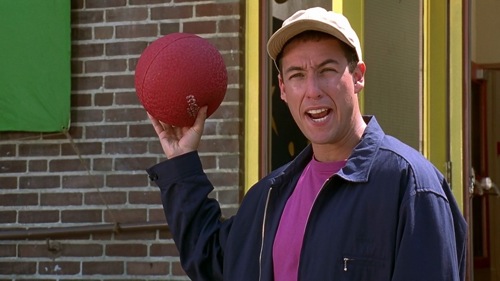 PROGRESSIVE: What is the difference between an idler and a slacker?

KINGWELL: Slackers are not-working — they define themselves in terms of the work they should be doing. The idler is not working at all, instead making his own projects and interests into an independent, work-free scale of value. That’s why idling can be so lively sometimes, though of course it needn’t be. The slacker, having to oppose the norms of work in sullen slouches and work-to-rule slowness, is actually still beholden to those norms. His resistance is futile because it’s actually a form of capitulation.

GLENN: Right! Like the idler, the slacker isn’t cut out for the 9-to-5 life. The slacker hates, fears, and resents his work, his duties, his obligations — think of mid-career Adam Sandler’s characters in Billy Madison and Big Daddy. But unlike the idler, the slacker doesn’t question, or reject, the working world’s value system. (In which, for example, “what you do for a living” equals “who you are.”) He’ll remain trapped, unhappily, in that value system, forever. Or he’ll remain trapped, happily, in that value system — because he’s made peace with it. As Sandler’s characters do, come to think of it, in both of those movies.

PROGRESSIVE: Assuming everyone suddenly became an idler, how would society function?

KINGWELL: Think of it this way: any market economy is a failed attempt to distribute goods and services exactly where they are needed or desired, as and when they are needed and desired. That’s all markets are, despite the pathological excrescences that nowadays attach to them: derivatives funds, advertising, shopping-as-leisure. If we had a perfect market, idling would be the norm, not the exception, because distribution would be frictionless. Most work is the result of inefficiency, not genuine need. In other words, idling is consistent with capitalism’s own internal logic, which of course implies, even if it never realizes, the end of capitalism.

GLENN: Society would regulate the general production, nobody would have one exclusive sphere of activity, and it would be possible for each and every one of us, as Marx once speculated, “to do one thing today and another tomorrow, to hunt in the morning, fish in the afternoon, rear cattle in the evening, criticize after dinner, just as [we feel like it], without ever becoming hunter, fisherman, herdsman or critic.” I mean, as long as we’re talking about an imaginary, what-if scenario.

PROGRESSIVE: Idling is commonly considered a bad thing in western society, something to be avoided. Why should we strive to idle? 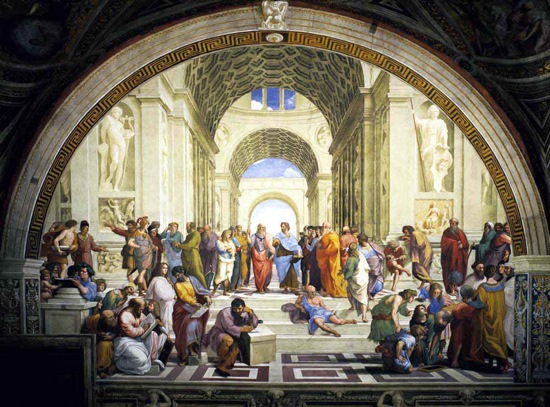 GLENN: Actually, in western society’s classical antiquity, idling wasn’t considered a bad thing — quite the opposite. Mark is much better than I am at explaining the difference, for Aristotle, between aergia and skhole, so I’ll content myself with quoting a more recent philosopher, Robert Louis Stevenson. “Idleness so called, which does not consist in doing nothing,” he writes, “but in doing a great deal not recognized in the dogmatic formularies of the ruling class, has as good a right to state its position as industry itself.” As for striving to be idle, this of course would be missing the point.

KINGWELL: Case in point from the Glossary itself: the Latin word negotium, which gives us English terms for business and transaction, actually means the negation of otium, which means leisure. But then otium gets annexed into the pejorative word ‘otiose’, which means useless or redundant. The language we use contains the clues the reversal of values that got us here, thinking that work is more important than leisure. The ancient philosophers knew better. Work is mere necessity; leisure is divine.

PROGRESSIVE: What is the Idler’s Glossary and why is it, as the back cover claims, the “The Devil’s Dictionary for the idling classes?” 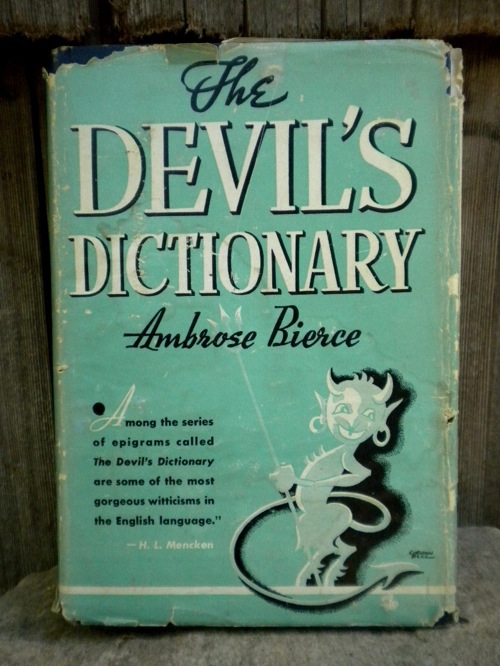 KINGWELL: Well, like Bierce’s gem, it’s a distillation of many gallons of wisdom into a potent little brew. Unlike Bierce, Josh is not cynical and his intent isn’t satirical. Good thing too, because we need positive vibes right now, not negative ones. (Though there is always room for satire in an idler’s life.)

GLENN: Mark is too kind! And so is our publisher, who made the comparison with Ambrose Bierce’s brilliant collection of mordant and cynical definitions. Among other things, I hope that the Idler’s Glossary is a corrective to thesauri that would have you believe that “slacker” and “idler,” for example, or “nap” and “doze,” or “sluggishness” and “indolence,” and so forth, are interchangeable terms. 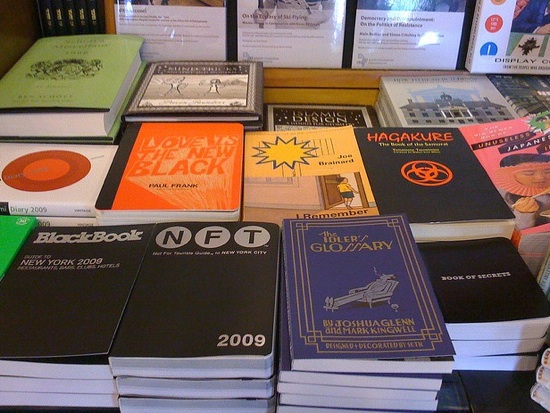 GLENN: Our publisher wanted more, more, more! If I’d given in to his demands, perhaps the book would be larger. Aren’t you glad it isn’t, though? I love its format, and Seth’s charming illustrations.

PROGRESSIVE: Speaking as a college student, does the Idler’s Glossary give any good philosophical justification for procrastination?

GLENN: No, but I do offer a diagnosis: “In the procrastinator, that lamentable failure of body and will that is languor, or torpor, becomes inextricably tangled with artistic perfectionism.” So… next time you’re procrastinating, ask yourself: “Am I too self-critical? Or am I just enervated?” If it’s the former, and especially if you’re procrastinating on a written assignment, just remember that “essay” means “necessarily imperfect attempt.” If the latter is the problem, a meditative bicycle ride to nowhere in particular and back will always — always — make you feel better.

KINGWELL: Procrastination is actually closely akin to boredom: a second-order desire (I wish I wanted to write my essay now) is not lining up with a first-order one (I want to write my essay now). Idlers are not in the business of solving procrastination stalls, but one clearly successful tactic is to fool yourself away from such blocks. There is no limit to the amount of productive activity we’re capable of as long as it’s not what we are supposed to be doing.

PROGRESSIVE: Is the Glossary meant to be read in a single sitting or spread out over time?

PROGRESSIVE: Mark Kingwell’s essay defending idling draws from variety of philosophers from Schopenhauer and Bertrand Russel to Kierkegaard, Aristotle, Lao Tzu, and Yoda. What is it about idling that draws so much attention from philosophers?

GLENN: It’s been suggested, of Socrates, who was always late to every appointment, that philosophy itself is born of idle curiosity — that idlers are natural philosophers, or vice versa. Is there anything to this theory, Mark?

KINGWELL: Well obviously I think there is, especially when you factor in the necessary idleness for even beginning to reflect on life’s meaning and possibilities. But the great stroke of really profound philosophers like Lao Tzu is to see that idleness isn’t just a necessary condition of philosophical questions. It is also, in itself, the best answer to them.

PROGRESSIVE: The glossary contains the etymology for terms such as “shit-heel,” “sluggard,” “hittin the sack,” “hanging out,” and even “doodle.” I have to ask, though, when did “Jabbaent” become a word?

KINGWELL: I’m not sure. Sometime after ‘kick back’ and maybe a little before ‘chillax’?

GLENN: The more closely we examine our subjective experiences, the less well our vocabulary serves us when it comes to articulating those experiences. “Jabbaent” — meaning, as sluggish as Jabba the Hutt — is an invented slang term. I didn’t invent it, but it amuses me.

The Wage Slave’s Glossary, which is both bigger and bolder than The Idler’s Glossary, shares our previous book’s core concerns — labor and leisure — but this time, instead of singing the praises of idling, we criticize and analyze what the Lowell Mill Girls (here in Massachusetts, in the 1830s) were the first to name wage slavery. Mark’s Introduction criticizes the “work idea” itself, and its corollaries: e.g., bureaucracy, credentialism, and workplace jargon. My glossary interrogates not only workplace jargon (from Bandwidth to Telecommuting) but obsolete and slang terms (from After-Dinner Man to Workbrickle) which reveal exactly how much we’ve forgotten about the secret history of the work idea. As before, Seth’s witty illustrations are the icing on the cake.

Joshua Glenn and Mark Kingwell, creators of The Idler’s Glossary, offer a wry brand of enlightenment in their pocket-sized guide to the terms of paid labor. The phrase “Keeping up with the Joneses’’ sprang from a 1913 comic strip in which the Joneses never appeared. And they trace the origin of “knock off work’’ to the days when oarsmen rowed in unison and a special knock would signify a time to rest. — Boston Globe column “The Find” by Jan Gardner

It’s funny that we have so many words relating to and about and of this place where we spend, you know, a third of our lives. It’s kind of interesting that we don’t explore that more. — Kai Ryssdal, host of public radio’s “Marketplace.” Click here for transcript of show.

Think of this tiny volume — ably buttressed by a nimbly delightful introduction from Mark Kingwell and the art of Seth — as an obverse companion [to The Idler’s Glossary], a book dedicated to resistance to work and the corporate language that supports it. Example: A clockless worker is “an employee who doesn’t leave her job behind at 5 p.m. because she has internalized management’s ‘clockless’ definition of the workday.” Topics such as Break and Retirement get similar deconstructions. Subversive stuff. — Toronto Globe & Mail