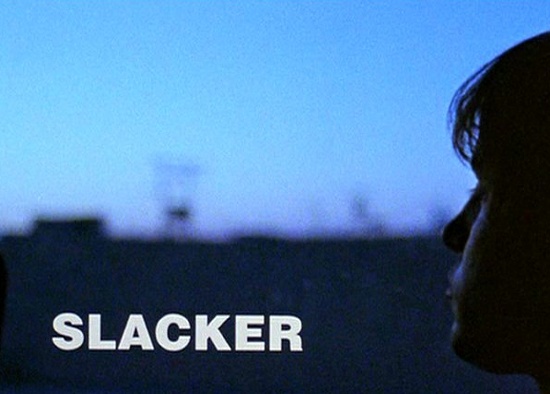 RICHARD LINKLATER (born 1960) has written and/or directed a few enjoyable, meandering films about disaffected types who don’t do a whole lot of anything besides kicking back and philosophizing in leisurely bull sessions; and he’s directed more tightly plotted movies (written by others) about disaffected types who band together to combat a repressive social order. I’ve suggested that his adaptation of Philip K. Dick’s A Scanner Darkly may have been a dialectical synthesis of these modes. Linklater loves discussing the ideas that inform his work; he’s too fond of doing so, really — listening to one of his movies’ DVD commentaries can be a tedious experience. (Is this why the Athenians forced Socrates to drink hemlock; not because they disagreed with his or ideas, or disliked him, but simply to get him to stop talking?) So let’s boil Linklater’s long-winded philosophy of life down to one simple but radical idea: Idling can be a form of activism. For those who need pointers on dodging wage slavery, he’s directed The Newton Boys, the real-life story of a shiftless band of sibling bank robbers; and The School of Rock, in which Jack Black never once ceases to scheme for ways to avoid holding down a job. For those of us already convinced of the merits of not working, he’s made Slacker (in which Austin, Texas, is portrayed as a noncoercive utopia dedicated to jawboning), as well as Waking Life and subUrbia. Just don’t call him a slacktivist — that’s something else altogether.

On his or her birthday, HiLobrow irregularly pays tribute to one of our high-, low-, no-, or hilobrow heroes. Also born this date: Thorstein Veblen and Alexander Trocchi.