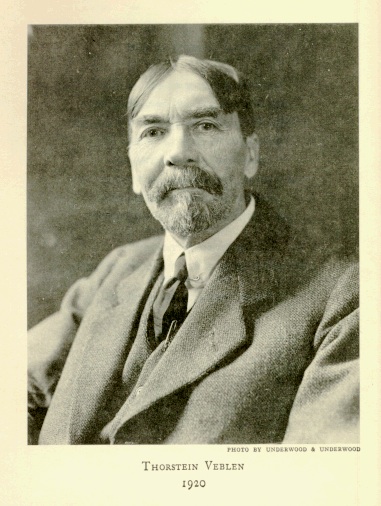 “The institution of a leisure class is found in its best development at the higher stages of the barbarian culture….” That first phrase from his 1899 book Theory of the Leisure Class summed up the Gilded Age, as far as academic knockabout THORSTEIN VEBLEN (1857-1929) was concerned. The lifestyle of the leading members of our supposedly advanced civilization, he drily noted, was based upon a boastful display of wealth that one might have expected to find in medieval Europe; worse, this retrogressive display took the form not of production, but “conspicuous consumption.” For Veblen, economics wasn’t merely the study of how society chooses to employ scarce resources to produce goods and services and distribute them for consumption; it was also necessarily the study of the evolution of our unconscious habits and ways of thinking, which rarely keep pace with the demands of the present age. We might not agree with Veblen’s notion of what, exactly, those demands are — though Adorno admired his criticisms of bourgeois pasttimes, he suspected Veblen was a technocrat obsessed with efficiency and thrift to the exclusion of pleasure and culture. But his curmudgeonly intransigence remains inspiring.

On his or her birthday, HiLobrow irregularly pays tribute to one of our high-, low-, no-, or hilobrow heroes. Also born this date: | Alexander Trocchi | Richard Linklater |