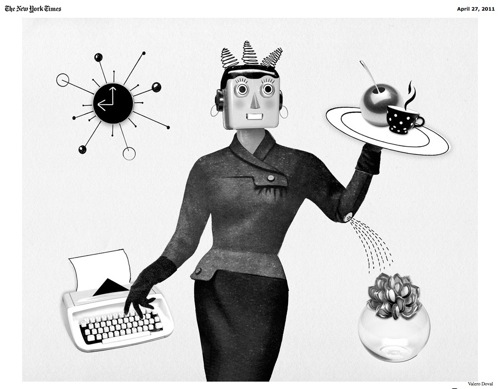 “In 1961, the trade magazine Today’s Secretary predicted that, 50 years hence, the “secretary of the future” would start her workday at noon and take monthlong vacations thanks to the ‘electronic computer.’ According to another optimistic assessment, secretaries (transported through office hallways ‘via trackless plastic bubble’) would be in ever-higher demand because of what was vaguely referred to as ‘business expansion.’

“But nearly 60 years later, on the date now promoted as Administrative Professionals Day, we’re living through the end of a recession in which around two million administrative and clerical workers lost their jobs after bosses discovered they could handle their calendars and travel arrangements online and rendered their assistants expendable. Clearly, while the secretary hasn’t joined the office boy and the iceman in the elephant’s graveyard of outmoded occupations, technological advancements haven’t panned out quite the way those midcentury futurists imagined. There are satisfactions to the job, to be sure, but for many secretaries, it remains often taxing, sometimes humiliating and increasingly precarious.”

Peril, a secretary, is the author of an excellent new book, Swimming in the Steno Pool: A Retro Guide to Making It in the Office.