Back in May, I pointed out that paleontologists have been participating in a sinister cover-up — by insisting that the recently discovered fossilized head of a juvenile alien-god from the planet Vhoorl [above] was nothing but a previously unrecorded species of octopus.

Imagine my dismay, last week, when I realized that HILOBROW co-founder Matthew Battles, who recently assumed editorship of the blog Gearfuse [note that he’s still co-editor of HiLobrow, too], is contributing to the disinformation campaign!

In a November 18 post, Battles claims that the object shown below (it was collected in 1870 and brought to Harvard, where it resides in the Peabody Museum of Archaeology and Ethnology today) is a spear point edged with sharks’ teeth. What? It’s obviously a claw hacked off the tentacle of a juvenile mature alien-god from the planet Vhoorl! 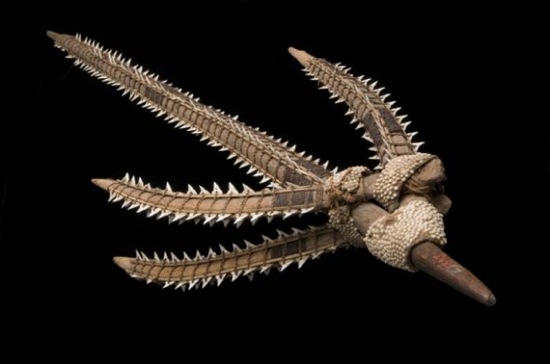 Matthew and I share an office, but he didn’t show up this past Friday, and he’s not in yet today. Perhaps he’s ashamed to face me…

PS: Check out Rick Poynor’s “What Does H.P. Lovecraft Look Like?” at Design Observer. Excerpt:

Lovecraft has always posed a problem for anyone trying to turn the writer’s nightmares into visual imagery. The stories’ peculiar pleasure lies in the fully developed mythology that interconnects them, and in the morbidly refined vocabulary Lovecraft uses to evoke cosmic horrors too awful to describe, monstrous things from out of space and time too unfathomable to name, treading a fine line between an exquisitely apt descriptive style and embarrassingly purple prose. Lovecraft’s warped psychology and aberrant obsessions are best savored within the limitlessly accommodating theater of your own imagination. The risk with any attempt to make his spectral inventions literal and solid is that they will just look silly.

About Josh, Haw-Haw, Most Visited, Uncanny