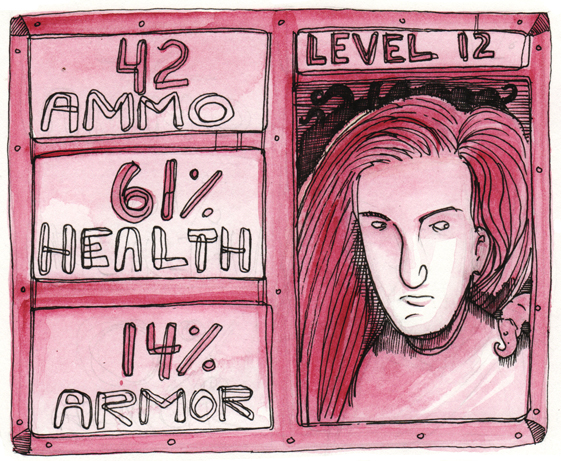 When Wolfenstein 3D was released in 1992, its innovations seemed obvious — as though it must have already existed in the inky ether between videogame players. JOHN ROMERO (born 1967)’s gameplay design — your gun barrel in the center bottom of the screen, your vitals listed below, a portrait of your avatar’s face; the placement of the player inside the experience, akin to breaking down the fourth wall in the theater — has since become the basic archetype of the FPS (first-person shooter), a videogame genre that reflects and channels adolescent rage (at yourself, your culture, your impotence in its various forms) so effectively that it’s now pervasive. This is too bad, because the videogame industry has grown corpulent and stagnant thanks to gory, angry, half-assed ripoffs of Wolfenstein 3D, not to mention Romero’s Doom and Quake. Still, it takes a special type of visionary to re-examine a medium’s bedrock assumptions; as minimalism was to modern art, and film noir to cinema, so the FPS has been to videogames. It’ll take more than a BFG9000 to contain the tide that Romero’s vision spawned.

— Text and Illustration by Joe Alterio. To view a gallery of Alterio’s illustrations for HiLobrow, click here.

On his or her birthday, HiLobrow irregularly pays tribute to one of our high-, low-, no-, or hilobrow heroes. Also born this date: Francis Bacon.

READ MORE about members of the Reconstructionist Generation (1964-73).