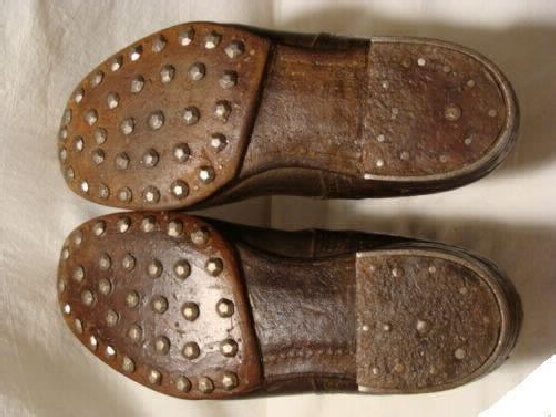 “[Tom Joad] wore a pair of new tan shoes of the kind called ‘army last,’ hobnailed and with half-circles like horseshoes to protect the edges of the heels from wear.” — John Steinbeck, The Grapes of Wrath (1939).

Hobnails inserted into a boot’s or shoe’s sole have been used, for durability’s sake, since antiquity; so have “heel irons” — i.e., iron horseshoe-shaped inserts. (Ancient Romans wore a hobnailed sandal/boot called caliga, from which Caligula got his moniker). So the hobnails and half-circles aren’t the most important clue if we’re hoping to determine what kind of shoe Joad would have been issued, upon his release at some point in the late 1930s, by the Oklahoma State Penitentiary (in McAlester, Okla. — c.f., Woodie Guthrie’s “Tom Joad Blues”: “Tom Joad got out of the old McAlester Pen/There he got his parole/After four long years on a man killing charge/Tom Joad come a-walkin’ down the road, poor boy/Tom Joad come a-walkin’ down the road”). However, Steinbeck also describes Joad’s footwear as “army last” shoes — which tells us everything we need to know.

A “last” is a form in the shape of a human foot; it’s used by cordwainers (shoemakers) to determine a shoe’s fit. Steinbeck here is talking about a form properly described as the Munson Army Last, named after Dr. Edward Luman Munson, a lieutenant colonel in the U.S. Army’s Medical Corps and head of the Army Service Shoe Board in the 1910s. Using primitive x-ray technology, in 1912 Munson developed a service shoe that — because it provided sufficient room for the toes, and “snug up” the heel and arch — offered superior stability, protection, and support. Devotees of “barefoot” athletic footwear like to quote Munson’s 1912 statement that “The construction of shoes for civilians is influenced almost wholly by considerations of fashion and style… the lasts are devised by persons grossly ignorant of, and quite indifferent to, the structure of the human foot and its physiological requirements as a covering.”

The hobnailed WWI Army service shoes pictured above are the sort of footwear to which Steinbeck refers. No doubt the McAlester Pen distributed surplus WWI service shoes, or shoes manufactured using the same lasts, to prisoners. Might Joad’s durable yet comfortable shoes symbolize a resolution of sorts to the novel’s central conflict: between the impulse to respond to hardship by focusing on one’s own needs (e.g., room for the toes, snugged-up arch) and the impulse to risk one’s safety by working for a common good (e.g., hobnails and heel irons)?

BONUS: Below is pictured a Munson Army Last (no. 1), next to narrower lasts. 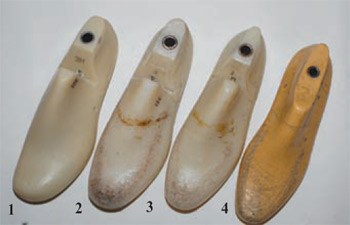 About Josh, Literature, Most Visited, Read-outs