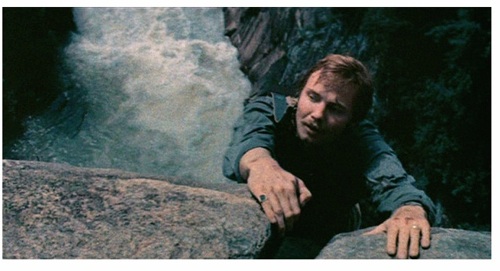 “He crouched and fell forward with his face on my white tennis shoe tops, trembled away into his legs and shook down to stillness.” — Ed Gentry, in James Dickey’s Deliverance (1970). (NB: Earlier this month, it was the fortieth anniversary of Dickey’s novel.)

Hm. What make of white tennis shoes might Gentry, an art director (in the advertising business) living in suburban Atlanta in the late ’60s, have worn on a weekend canoe trip through the north Georgia wilderness? While packing, Gentry informs his wife that he’s going to wear an “old nylon flying suit” and “some tennis shoes” — but that’s not much help.

Might Gentry have been wearing New Balance or Reeboks? No, because these were designed for running — and therefore more expensive than “tennis shoes” (e.g., casual sneakers). Nikes were running shoes, too — besides, they didn’t exist as such yet. As for Pumas, though they were popular (a Pumas-sporting Joe Namath led the Jets to victory in Super Bowl III in ’69), they were “football shoes.” Gentry was wearing thin-soled tennis shoes: we know this because when he’s pushing a canoe (loaded with a dead body) along a shallow stretch of river, he remarks that he can “feel every pebble through the city rubber of my tennis shoes.” We also know he’s not interested in traction, because at one point he tells his macho friend Lewis that his (Gentry’s) philosophy of life is “sliding… living by antifriction… grooving with comfort.”

In keeping with his old flying suit, it’s likely that Gentry wore an inexpensive pair of tennis shoes — possibly a generic-style sneaker from Montgomery Ward. Or perhaps one of B.F. Goodrich’s models: e.g., Jack Purcells or P.F. Flyers (both later sold to Converse) are likely. 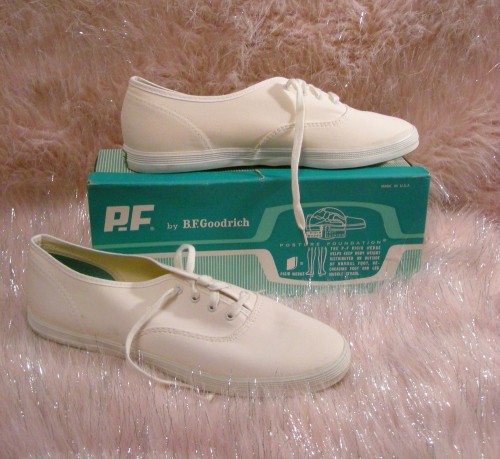 But just as New Balance and Reeboks were most likely too expensive, I’m guessing B.F. Goodrich-brand tennis shoes would’ve been too cheap-o for Gentry, who explains his taste in advertising graphics like so: “I didn’t as a rule like too traditional, cheap Boraxy ads, with screaming typeforms and an obvious and chillingly commercial use of sex, nor did I like the overly ‘creative’ kind of ad, with some farfetched or gimmicked-up formula or calculated craziness.” Gentry is middle-of-the-road: his sneakers wouldn’t be too cheap-o, I think.

How about Adidas? I don’t think so. Though their plain white “Rod Laver” and “Stan Smith” models would become extremely popular tennis shoes, neither was introduced before 1970. Also, as with Converse, I think Gentry would’ve mentioned the shoes’ make if he’d been wearing Adidas. We’re looking for something slightly more generic — though, again, not overly cheap-o. 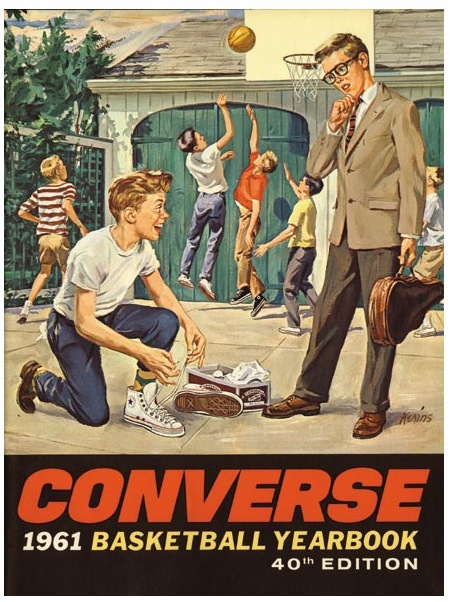 Might Gentry have been wearing Converse All-Stars? It’s not impossible; Converse was a popular urban sneaker, and they were cheap but not cheap-o. We know he wasn’t wearing Converse high-tops: early in the trip, Gentry runs through the woods and “two or three soft, collapsing jumps” suffice to “fill my tennis shoes with leaf mold.” Later, when he’s recovering from his ordeal in a bed and breakfast, he says, “I slid off my tennis shoes and went to the door sock-footed.” Not high-tops, then. But was Gentry wearing low-top Cons? It’s not impossible, but I’m not convinced. 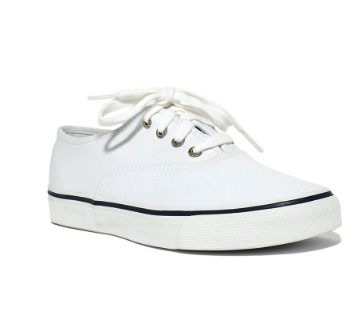 However, lacking any textual clues, we’re going to have to take our cue from the theme of Dickey’s novel: re-masculinization.

What brand of tennis shoe might an emasculated man have worn in 1969? Certainly not Converse, which were macho as anything. 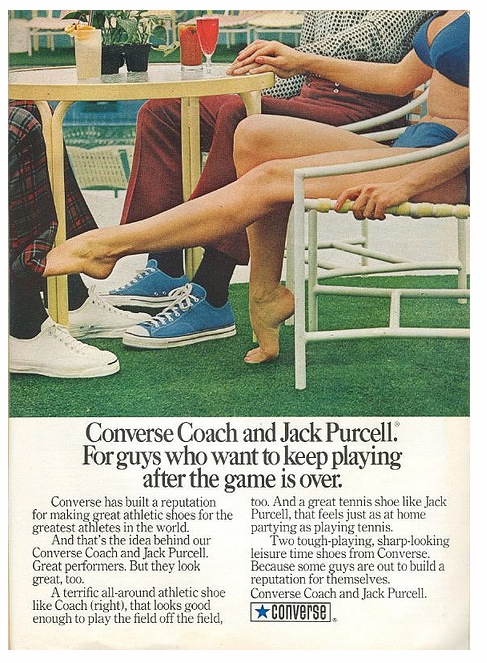 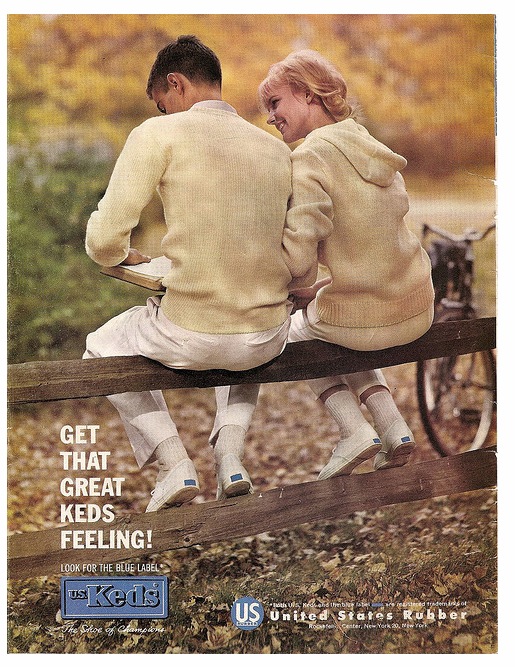 Though originally manufactured for men, by midcentury Keds were popular with women, too. What’s more, they were considered stylish among glamorous women like Audrey Hepburn, Marilyn Monroe and Jackie O (Mischa Barton is the Keds poster girl now) — and they were frequently celebrated by Vogue, Elle, and Women’s Wear Daily. Wearing Keds might easily have contributed to Gentry’s overall feeling of emasculation. Note how the male model in the 1962 ad above (perhaps one of Gentry’s?) is dressed exactly like his female counterpart. 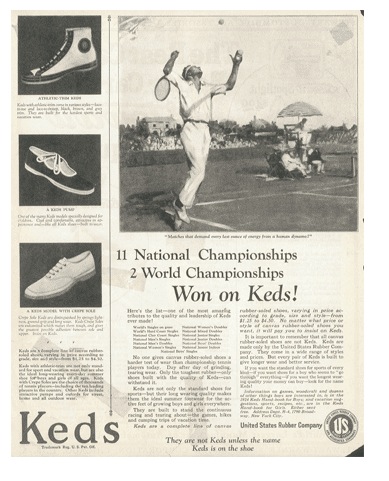 So why didn’t Gentry say “Keds” if that’s what he was wearing? Keds were the the first shoe with a soft rubber sole — an ad man dubbed them “sneakers” in 1917, which helped popularize a slang term coined decades earlier by Boston schoolchildren (who were referring to tennis shoes). In the 1920s, Keds became the preferred footwear for pro tennis players — making an appearance at thirteen tennis championships. By midcentury, then, you could say “tennis shoes” and mean Keds, much like you could say “Coke” and mean soda pop, or “Kleenex” and mean facial tissues.

The shoes upon which the hillbilly killed by Gentry’s arrow trembled away into stillness were Keds.

About Josh, Literature, Most Visited, Read-outs