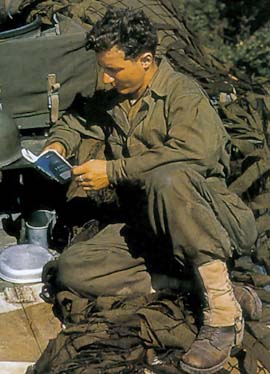 “[Chaplain Captain A.T. Tappman] moved slowly. He was downcast and burdened with self-reproach when he stepped without noise from the colonel’s office on his rubber-soled and rubber-heeled brown shoes.” — Joseph Heller, Catch-22 (1961)

I’m guessing that the Chaplain (who, in the first edition of Catch-22, is named Robert Oliver Shipman; this was changed in later US editions of the novel because the 1970 movie adaptation renamed the character) was wearing the Army’s “roughout” field shoe. Known by the Quartermaster as “Service Shoe, Reverse Uppers,” these shoes were manufactured with rubber soles and heels — unlike, e.g., the Army’s Type II Service Shoe, which featured a (squeaky) leather sole and rubber heel. Army footwear aficionados who disagree, please note three things before posting your own theories: 1) the Chaplain is based overseas, 2) the novel is set in ’44 and after, and 3) the Chaplain is not wearing combat boots — he’s wearing shoes.