The children’s books written and illustrated by VIRGINIA LEE BURTON (1909-68), whose father was an MIT engineer and mother an artist (who abandoned her children to foster care), are as fancifully yet precisely engineered as a cuckoo clock. She won the 1942 Caldecott Medal for The Little House, in which the sharp angles of industrial civilization creep close to, then engulf the anthropomorphized, gently rounded title character. Her best-known book is Mike Mulligan and His Steam Shovel (1939); Choo Choo (1937), Katy and the Big Snow (1943), and Maybelle the Cable Car (1952) also feature an anthropomorphized piece of industrial equipment — Katy is a snowplow — whose existence is threatened by larger, newer, brutal and sinister avatars of technological progress. (Was Burton steampunk? She was DIY, anyway: in 1938 she founded the Folly Cove [Gloucester, Mass.] Designers, a textile collective whose whimsical wallpaper, tablecloths, etc., are gorgeous, and highly collectible.) My favorite Burton story is the un-quaint, non-partisan yarn Calico the Wonder Horse, or the Saga of Stewy Stinker (1941), in which not a single machine (unless a stagecoach counts) appears. Reading it to my children, like my father used to read it to me, I’ve decided that Burton’s stories are themselves technologies — ones whose joints have been concealed by organic designs — which seem less crafted than grown. 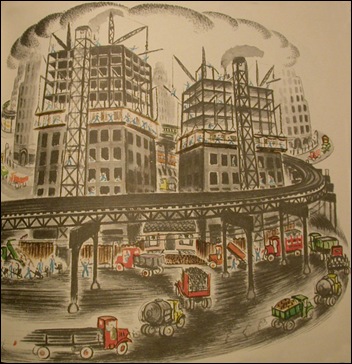 On his or her birthday, HiLobrow irregularly pays tribute to one of our high-, low-, no-, or hilobrow heroes. Also born this date: Fred MacMurray.

READ MORE about members of the Partisan generation (1904-13).