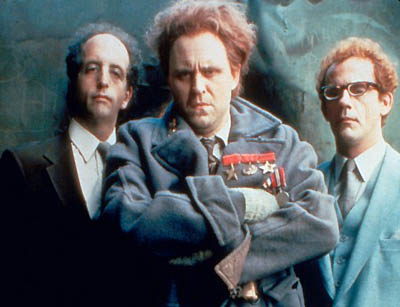 In W.D. Richter’s cult New Wave SF satire The Adventures of Buckaroo Banzai Across the 8th Dimension (1984), we learn that in October 1938, a thousand Red Lectroids (who’d staged an unsuccessful coup on Planet 10) invaded our planet — and infiltrated the population. As Pakistan is to Al Qaeda, the Earth became the Red Lectroids’ hideout and HQ.

When the lectroido-fascist aliens (pictured at top) landed in Grover’s Mill, New Jersey, in ’38, only one brave, independent-minded soul dared spread the news. It was the brilliant, anti-fascist director, producer, and actor Orson Welles — who, as we can see in the image above, was smoking a pipe at the time. Coincidence?

According to Buckaroo Banzai, after Welles’ broadcast, the alien lizard-men hypnotized him into publicly claiming that his heroics had been a stunt. In real life, soon after the “War of the Worlds” incident, Welles abandoned radio and theater for Hollywood — which chewed him up and spit him out. Around this time Welles gave up his pipe for cigars. Coincidence?