Last month, HILOBROW’s Peggy Nelson urged us to surrender to the imperatives of the “networked self.” She used to be freaked out, she said, when someone to whom she was talking was distracted by another conversation they were simultaneously having via mobile, Twitter, email… but

At Slate, today, cartoonist James Sturm announces that he plans to stop this brave new world and get off. He won’t use the Internet, or send and receive email, for four months. Why? Because of the pervasiveness of the new multiplicity. Or, in cartoon-ese: 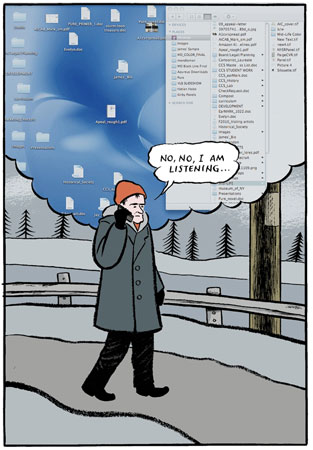 The Internet and email are getting in the way of things that Sturm values, he says. Like family time, and the ability to “carve out some space for myself to make new work.”

How to make use of new communications technologies without getting used by them? I wrote about this question some 14 years ago, after spending time at a gathering of plain Quakers (including Scott Savage, one of the coolest people I’ve ever met), Bill McKibben, the neo-Luddite Kirkpatrick Sale, the Internet-skeptical physicist Clifford Stoll, and others concerned about the same thing. The answer, arrived at via consensus, was simple: we should prioritize “times of rest, times of fasting from production and consumption; time spent in solitude, listening and waiting.”

Easier said than done — because, as Peggy notes, our use of communications technologies cannot be disentangled from existential questions. If we don’t know what makes us tick, then we’re doomed to yo-yo from Internet addiction to neo-Luddism and back again.