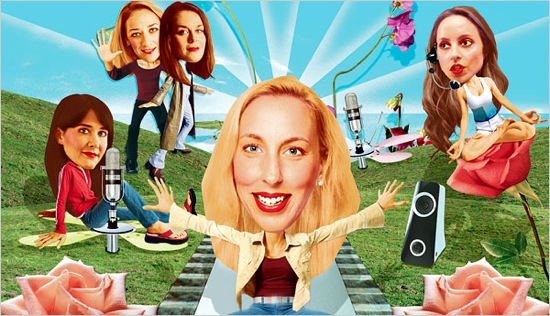 HILOBROW is superficially similar, as we’ve noted, to Middlebrow. So HiLobrow despises Middlebrow for the same reason that idlers detest slackers, and punks detest rockists: we’re afraid that we’re really just like them. No wonder, then, that hilo types are ambivalent — not apathetic, but torn in opposing directions — about New Age.

“At its origins, New Age was about expanding consciousness to cosmic range, integrating humanity with nature at its vastest and most awesome,” Camille Paglia wrote in Salon, once. “Alas, today’s New Age has shrunk down to pampering the wounded ‘inner child,’ yet another in the endless American parade of victims.”

This statement might mark Paglia as a true highbrow — i.e., because she digs Lowbrow and despises Middlebrow. But Paglia’s disposition is more complicated, less heimlich, than that. Whether we like it (or her) or not, it’s possible that she’s a hilobrow. The same can be said of Jeanette Winterson, who — writing in the NYT Book Review, yesterday — sounds an ambivalent note about a fictional New Age cult in Margaret Atwood’s new novel, The Year of the Flood.

The Waterless Flood has long been predicted by God’s Gardeners, a back-to-nature cult founded by Adam One. Its members live simply and organically, sing terrible hymns, have no dress sense and peddle a bolted-together theology, difficult to think about if you think at all. With values diametrically opposed to those of the ruling CorpSEcorps, the Gardeners aren’t “the answer,” but at least they’ve asked enough questions to avoid a life of endless shopping and face-lifts.

Expanding consciousness to cosmic range — yes! Integrating humanity with nature at its vastest and most awesome — yes! Pampering the wounded inner child — no! Values diametrically opposed to those of the mainstream — yes! Asking enough questions — yes! Bolted-together theology — no! (“Difficult to think about if you think at all”: good line.)

What to make, then, of “Seeing Yourself in Their Light,” the lead story in yesterday’s NYT Fashion and Style section (illustration at top)? Of the New Gurus, “young women who are vegetarian, well versed in self-help and New Age spirituality, and who are finding a way to make a living preaching to eager audiences, mostly female”? Are we ambivalent about them, readers? We’d like to hear from you. Post your comments about the NYT story, and New Age, below.