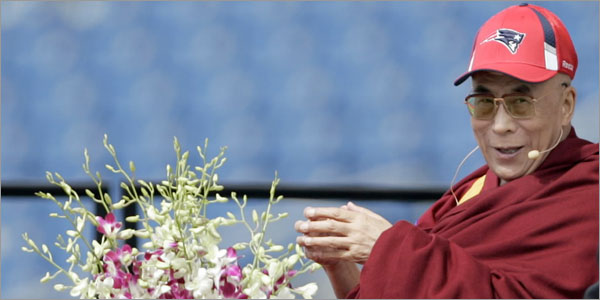 The Dalai Lama was in Boston recently. That’s him, above, this past Sunday, speaking to a crowd of 16,000 at Foxboro Stadium. While wearing a Patriots cap. That’s right: The Dalai Lama is a lobrow! You heard it here first.

Don’t be offended: In HiLobrow.com’s chart of Modern Dispositions, the two most admirable are Hibrow and Lobrow. (Nobrow is impressive, but not particularly admirable; HiLobrow itself can’t be described except apophatically, so… is it admirable? Impossible to say.) Despite the outdated phrenological connotations, Hibrow is not superior to Lobrow; they are equally worthy. And we’re not really judging the Dalai Lama on the basis of his headgear. If he wore a top hat, or a beret, or a crown, we’d still hail him as a lobrow.

Lobrow’s ideal is Wisdom, from which flows not only religion but empathy (compassion, warm-heartedness). Not to be confused with hibrow sympathy, lobrow empathy shares and understands how others feel without agreement or disagreement. For better and worse, empathy is irrational, revolutionary, utopian. A few days before he spoke at Foxboro, the DL visited Harvard and MIT and hawked compassion to the highbrows:

The Dalai Lama had some imaginative ideas for MIT scientists to work for peace. “You could invent an injection for compassion,” he said. “I would want that.” And maybe commerce could contribute: “You could have shops selling compassion. In a supermarket, you could buy compassion.”

Talk about irrational, revolutionary, and utopian! The Dalai Lama is so cool. He’s an avatar of Lobrow.

PS: Lobrow, unlike Anti-Hibrow (with which it is too often confused), is not romanticist, ideological, or fanatical. At Foxboro, the Dalai Lama illustrated this when he said: “I studied Buddhism, I practiced Buddhism, and through practice I got some sort of little experience . . . Very low but still better than zero. Buddhism is best for my case. That doesn’t mean Buddhism is best religion to everyone, certainly not.”