Do what thou Wilt

This morning I read Tom Sharpe’s 1976 campus novel, Wilt, because an AbeBooks survey of British readers named it one of the 10 funniest books ever. I was convalescing, and therefore receptive to inspiration. 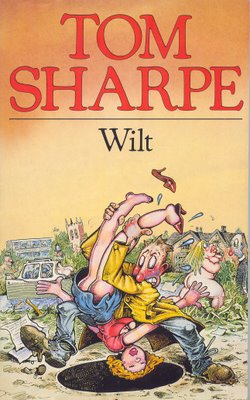 There’s a moment near the end of Wilt when, having being grilled by the police for 72 hours because they suspect that he’s killed his wife, Eva, Wilt (the nebbishy academic protag) has a self-overcoming, values-revaluing, universe-reconsidering breakthrough.

All the encumbrances of possessions, habits, salary and status, all the social conformities, the niceties of estimation of himself and other people which he and Eva had acquired, all these had gone. And whatever happened he would never again succumb to the siren calls of self-effacement…. The race was not to the swift after all, it was the the indefatigably inconsequential and life was random, anarchic, and chaotic. Rules were made to be broken and the man with the grasshopper mind was one jump ahead of all the others.

Aha! As I recall, you’ll find a similar breakthrough in several of the funniest British and American novels: Catch-22, The Hitchhiker’s Guide to the Galaxy, Lucky Jim, perhaps even Bridget Jones’s Diary.

Call it a hilobrow secular religion, smuggled past the censors since midcentury in the form of comic novels.