The frog’s bulging hemispheric eyes, not to mention its association with ancient Egypt — and with the occult in general (e.g., “eye of newt and toe of frog”) — seem to suggest a hypnotic power, an ability to bend the human will to its own purposes.

Not totally sure what’s going on here, but this frog seems hypnotic. It’s certainly issuing a command. 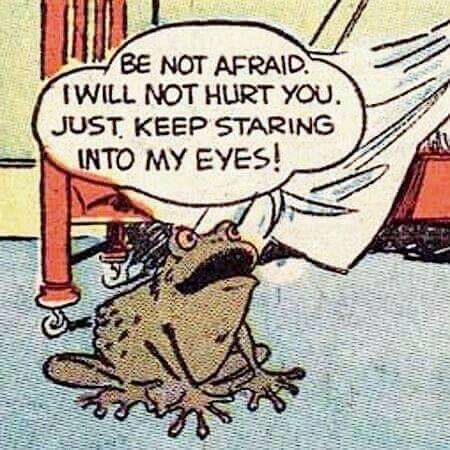 Undated midcentury comic book panel that I recently came across.

Surely Cha! Cha!, the red-eyed tree frog is commanding us to obey.

The villainous Hypnotoad first appeared in “The Day the Earth Stood Stupid,” a 2001 episode of Futurama.

Hypnotoad has since become a meme, leading to this sort of thing: