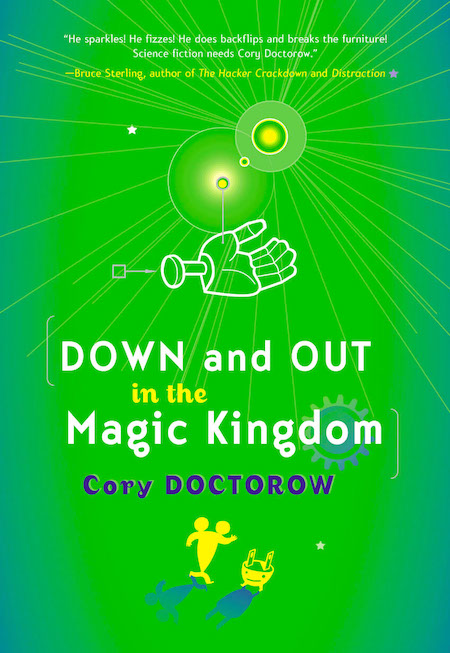 Cory Doctorow’s sci-fi adventure Down and Out in the Magic Kingdom.

In the 22nd century, the dominant worldwide culture is the “Bitchun Society” — a post-scarcity culture in which rejuvenation and body-enhancement have made death obsolete, everyone enjoys basic rights, and “whuffie” (online social reputation) has replaced money as a way of apportioning status and luxuries. Our narrator, Jules, is a young man of 100 or so who’s been brought back to life (“restored from backup”) four times so far; he now lives at Walt Disney World, which is run by rival “ad-hocs,” who — having seized the park from a gang of wealthy former shareholders who had been operating it as their private preserve — compete for whuffie by enhancing the theme park’s rides with high-tech upgrades. Julius and his girlfriend, Lil, help oversee the Magic Kingdom’s Liberty Square. This peaceful anarchist utopia has recently been disrupted by a new group, which provides immersive direct-to-brain interfaces that threaten to make the analog Walt Disney World as we’ve known it obsolete. Can Julius stop his favorite ride, the Haunted Mansion, from being virtualized? Or will he be murdered — again — by a shadowy rival?

Fun facts: For nearly twenty years, Doctorow was a co-editor of the blog Boing Boing. Down and Out in the Magic Kingdom won a Locus Award for Best First Novel. It was the first novel released under one of the Creative Commons licenses. A semi-sequel short story, “Truncat” was also published in 2003.