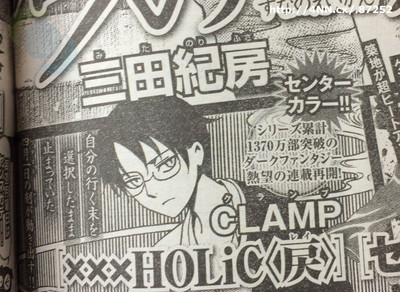 The manga xxxHolic (pronounced simply “holic”), which is illustrated in a style influenced by 18th-century Japanese woodblock prints in the Ukiyo-e style, was created by the all-female manga artist group CLAMP. Our protagonist, Watanuki, is a high-school student tormented by spirits that only he can perceive; as the series begins, he becomes the servant of Yūko, a kindly but mysterious witch who offers to exorcise the spirits in exchange for his service. In Yūko’s service, however, Watanuki finds himself experiencing supernatural phenomena — and weird customers — that are just as bad, or worse, than his spirit problem. Kunogi, Watanuki’s love interest, and Dōmeki, a classmate whom Watanuki initially hates but whose friendship he comes to value, also join in his various adventures.

Fun facts: xxxHolic was serialized in Kodansha’s weekly Young Magazine from 2003–2010; it then moved to the magazine Bessatsu Shōnen until ending in February 2011. It has been released as a series of 19 tankōbon volumes. It was adapted as a 2005 animated film, followed by a 2006–2011 anime TV series. The group CLAMP consists of Nanase Ohkawa, who does much of the writing, and the artists Mokona, Tsubaki Nekoi, and Satsuki Igarashi.