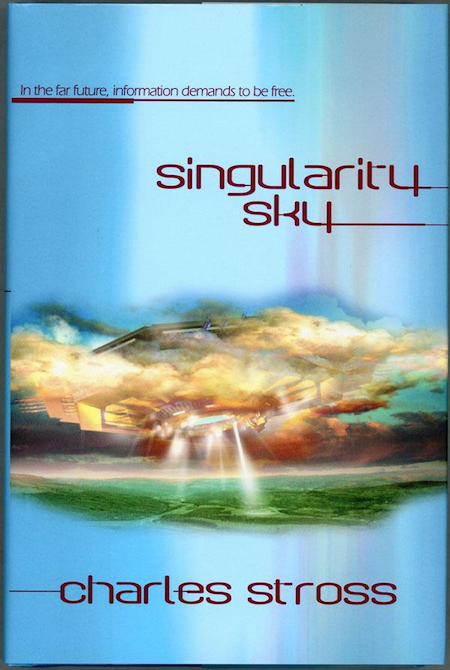 Rochard’s World is a technologically backward colony of the New Republic, a galaxy-spanning civilization that originated on Earth. When the Festival — an alien or posthuman civilization of uploaded minds —arrives, offering to swap molecular assemblers and other advanced tech in exchange for info and entertainment, a post-scarcity economy rapidly develops. The politically repressive New Republic prepares a military response, which is not only doomed to failure but — because it involves time travel — will certainly trigger the New Republic’s devastation by the Eschaton. (At some point during the 21st century, back on Earth, a godlike artificial intelligence came into being and scattered the planet’s population around the galaxy; the Eschaton’s one commandment is “Thou shalt not violate causality” — disobey at your peril.) In the New Republic’s capital city, Rachel Mansour, an augmented special ops agent who works for the United Nations — think of Iain M. Banks’s Culture — recruits Martin Springfield, an interstellar ships-drive engineer hired by the New Republic’s Admiralty, to prevent his employers from violating causality; Martin, however, is now what he seems. The two travel with the New Republic battle fleet as it heads to its certain doom — with Vassily Muller, a secret police agent, hot on their trail. The story’s “information wants to be free” moral is tedious, and the writing veers close to parody (perhaps of Alastair Reynolds’s 2000 space opera Revelation Space?), but this universe had potential. Alas, after one sequel Stross abandoned it.

Fun facts: This was Stross’s first novel published in book form; he was already well regarded for his stories. Though best known for his Merchant Princes (2004–ongoing) and Laundry Files (2004–ongoing) series, I prefer his stand-alone novels Accelerando (2005) and Glasshouse (2006), as well as Halting State (2007), the first installment in an incomplete trilogy.