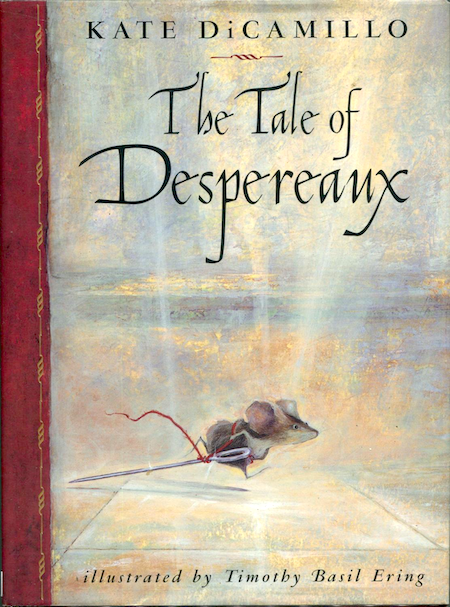 Kate DiCamillo’s children’s fantasy adventure The Tale of Despereaux: Being the Story of a Mouse, a Princess, Some Soup, and a Spool of Thread.

Despereaux, a castle mouse, is the only survivor of his mother’s latest litter and an oddball with an undersized body and oversized ears. He learns to read… and (like Don Quixote) becomes obsessed with tales of chivalry. Which leads him to get acquainted with the castle’s real-life princess, known as Pea. However, mice are forbidden to speak to humans; the castle’s mouse council banishes Despereaux to the pitch-black dungeon… where he becomes friendly with Greogory, the jailer. There are other stories here, too: that of Roscuro, a rat who accidentally causes the death of Pea’s mother; and Mig, a castle servant who fantasizes about becoming a princess, and who conspires with Roscuro. When Princess Pea is kidnapped, only Despereaux has the wit and courage to track her down and do what it takes to set her free.