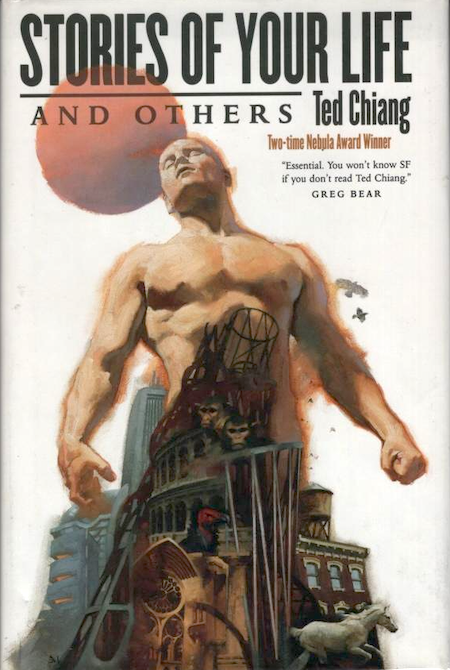 Ted Chiang’s sci-fi story collection Stories of Your Life and Others.

This collection of the author’s first eight stories — which were originally published, from 1990–2001, in Omni, Asimov’s, and elsewhere — is very strong. “Tower of Babylon,” “Story of Your Life, and “Hell Is the Absence of God” were Nebula Award winners; and the latter also won the Hugo. These are exercises in creative, imaginative ratiocination. “Division by Zero” (1991), for example, begins with the line “Dividing a number by zero doesn’t produce an infinitely large number as an answer,” before turning into an affecting tale of a mathematician who no longer find her subject intuitively meaningful. “Understand” (1991) is about a super-intelligent man who enters into conflict with… another super-intelligence. And “Story of Your Life” (1998), meanwhile, takes inspiration from the “variational principle” in physics… in telling a story about a linguist tasked by the US Army with figuring out how to communicate with the “heptapod” aliens who have arrived mysteriously on Earth. When writing in their language, she finds, trains of thought are directionless, and premises and conclusions interchangeable! China Miéville’s review of the book notes that, for Chiang, “humanism is inextricable from rationalism”, and “it is the rationalism of the characters — and the writer — that makes them emotional and human.”

Fun facts: Arrival, the 2016 film adaptation of “Story of Your Life,” was directed by Denis Villeneuve. Starring Amy Adams, Jeremy Renner, and Forest Whitaker, it was nominated for eight Academy Awards.