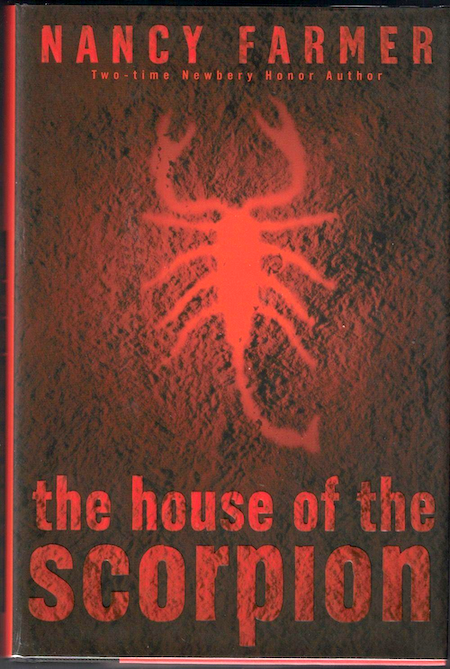 Nancy Farmer’s Matteo Alacran YA sci-fi adventure The House of the Scorpion.

Matteo Alacrán is an adolescent living as a kind of honored prisoner on the estate of El Patron, leader of Opium — a narco-state separating Aztlán (formerly Mexico) and the United States. He has a bodyguard and mentor, Tam Lin, and a girlfriend, Maria. He has been given an education and other privileges… and yet, as a young child he was treated as less than human. At last he discovers that he is El Patron’s clone, but this raises a further question: Why hasn’t he been intellectually crippled and reduced to a meat-sack of organs ready for transplanting, like El Patron’s other clones? Could it be that the 100+-year-old drug lord intends for Matteo to take over Opium, one of these days? Meanwhile, Matteo and others in the story wrestle with the question of whether a clone is a human, an individual with rights? Matteo is horrified by El Patron… and yet, at the same time he is El Patron. Eventually, with a little help from friends, Matt flees for Aztlán and finds himself in a cult-like orphanage… where his inherited traits for political plotting, charismatic leadership, and ruthlessness will serve him well. One gets the sense that this should have been two books, not one. But it’s fun.

Fun facts: Followed by The Lord of Opium (2013). The House of the Scorpion won the U.S. National Book Award for Young People’s Literature and was named a Newbery Honor Book.