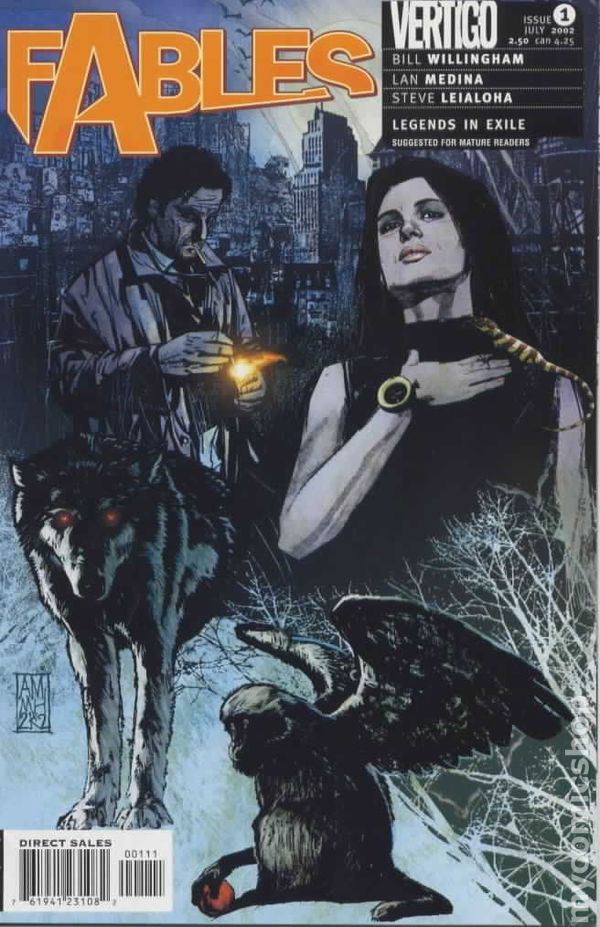 The Fables series — published by DC’s Vertigo imprint, under the direction of visionary editor Karen Berger — follows the adventures of a clandestine community of fairy-tale and folklore characters who, centuries ago, were driven out of their homelands into our world. When the story begins, the Fables’ city-within-New York City, Fabletown, is run by Bigby Wolf (the sheriff) and Snow White (deputy mayor), who attempt to solve conflicts both in their town and on their upstate “farm.” Other characters include Grimble, the troll from “THree Billy Goats Gruff,” Bufkin, a winged monkey from the Oz stories, and Beauty and the Beast — who later will become Fabletown’s deputy mayor and mayor. Prince Charming, as one might expect, is a narcissist, womanizer, and rogue — though he occasionally will do the right thing. The story arcs, in the early days of the series, take the form of various adventure narratives… from murder mystery to conspiracy to caper. A breakout hit, the series ran for thirteen years, with various spinoffs.

Fun facts: Willingham, who got his start as TSR artist — contributing illustrations to AD&D modules, not to mention the Fiend Folio — served as sole writer for the entirety of the Fables series, with Mark Buckingham penciling more than 110 issues. Jess Nevins’s Fables Encyclopedia offers valuable annotations to the comics.